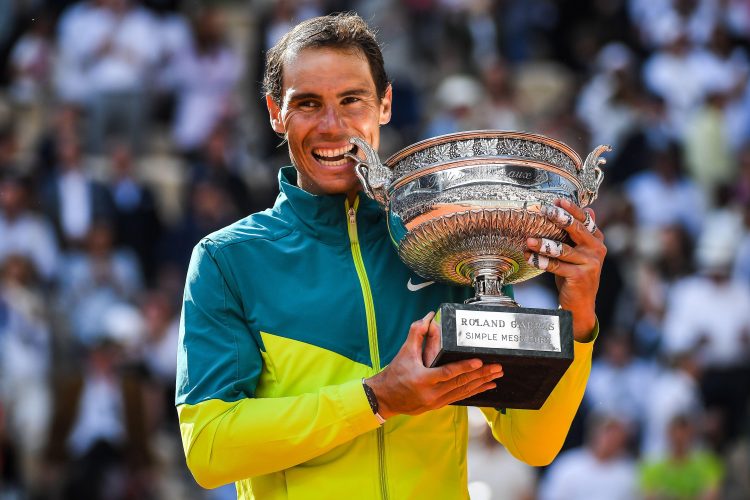 Rafael Nadal’s tryst with the red clay in Paris continued on Sunday as the world number five defeated Casper Ruud in straight sets in the 2022 French Open final to win a record-extending 14th title at Roland Garros. The Spaniard reclaimed his throne as the King of Clay on Court Philippe Chatrier after beating the world number eight 6-3, 6-3, 6-0 in just two hours and 18 minutes.

With this victory, Nadal became the oldest player to win the French Open while also securing a 22nd Grand Slam title, moving him two clear of arch-rival Novak Djokovic and Roger Federer on the all-time list. After his exploits in 2022, Nadal has now improved his jaw-dropping record at Roland Garros to 112 wins and just three losses while also becoming just the third male player in the Open Era to beat four top-ten players on their way to a major’s title. The 36-year-old defeated Felix Auger Aliassime in Round 4, world number one Novak Djokovic in the quarter-final and Alexander Zverev in the semi-final to achieve this feat.

In Sunday’s final, Nadal was at his dominant best as he comfortably beat world number eight Casper Ruud to the title, who had previously never made it past the fourth round in Paris. Just like in the quarter-final against Djokovic, the Spaniard stormed out of the gates and secured an early 2-0 lead. Although a couple of double faults saw Ruud earn a rare break, Nadal broke back immediately and continued to pepper the Norwegian’s backhand as he comfortably took the first set 6-3.

In the second set, Nadal failed to convert three break points in the opening game and gave away a 3-1 lead due to another untimely double fault. However, just like in the first set, Nadal broke back immediately and won the next five games in a row to take the second set and establish an unassailing 2-0 advantage.

The third set was more of a procession than a contest, with Nadal strangling his opponent with his heavy topspin groundstrokes and cruising to a 6-0 victory that sealed his 14th French Open win from 14 finals.

Following his incredible victory at the Australian Open earlier this year, the world number five has won the first two grand slams of the season for the first time in his career. Although the continued toll on his body and the recurring foot injury has cast doubt on whether Nadal will compete in Wimbledon or beyond, the Spaniard stated post-match that ‘he will keep fighting to try and keep going.’