Pakistan down New Zealand to make it two wins in two

Pakistan down New Zealand to make it two wins in two 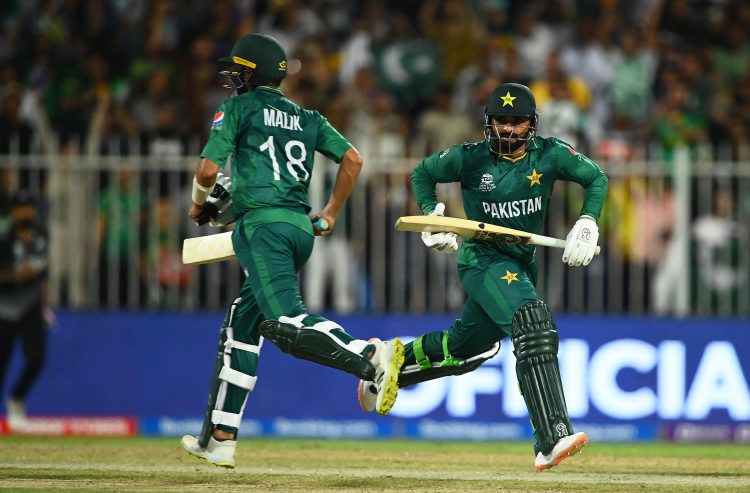 Pakistan’s bright start to the 2021 T20 World Cup continued as Babar Azam’s men secured their second victory of the competition with another excellent all-round performance against New Zealand at Sharjah. Buoyed by a fiery spell of 4 for 22 from Haris Rauf, Pakistan restricted the Kiwis to a modest total of 134, which was chased down with eight balls to spare after a stunning cameo of 27 from 12 from Asif Ali at the death.

Pakistan entered this fixture on the back of their stellar victory against India in the opening encounter, and Babar Azam’s side continued that momentum into this fixture with another clinical display. Although Shaheen Afridi couldn’t find the swing he extracted with the new ball against India, Pakistan kept things tight in the powerplay as the Kiwi openers – Martin Guptill and Daryl Mitchell – struggled to score freely.

Haris Rauf removed Guptill after a scratchy knock of 17 from 20, and New Zealand clawed their way to 60 for three at the halfway mark. The Kiwis threatened to accelerate after Kane Williamson and Devon Conway took 27 runs in two overs, but the New Zealand captain’s run-out in the 14th over arrested that momentum.

Run-scoring got increasingly difficult as the game progressed and the extra ball speed of Haris Rauf proved to be the difference, who troubled the Kiwi batters with his hard lengths and occasional changes of pace. Rauf picked up three wickets and conceded only 12 runs in his final two overs at the death, finishing with career-best figures of 4-22 to limit New Zealand to a below-par 134.

The Pakistan openers cruised home in their chase of 151 on Sunday but found things trickier on a slightly more sluggish pitch in Sharjah. Tim Southee used his slower deliveries and cutters to great effect with the new ball, bowling three overs for only 12 runs in the powerplay while also removing the captain Babar Azam. The leg-spin of Ish Sodhi provided further penetration, trapping both Fakhar Zaman and Mohammad Rizwan LBW before Devon Conway pulled off the catch of the tournament so far at long-off to dismiss Mohammad Hafeez.

There were some nerves in the Pakistan dugout as they needed 48 off 31 when Asif Ali walked out to bat, but the number seven quelled those fears with an excellent flourish at the death. Ali smashed his first ball for a boundary past short third man, before tonking two consecutive sixes off Tim Southee to bring the required-run-rate down to 6. The experienced Shoaib Malik also joined in on the action, carting Mitchell Santner for a four and a six in the 18th over and Pakistan cruised home with five wickets to spare to take their Group B tally to four points.