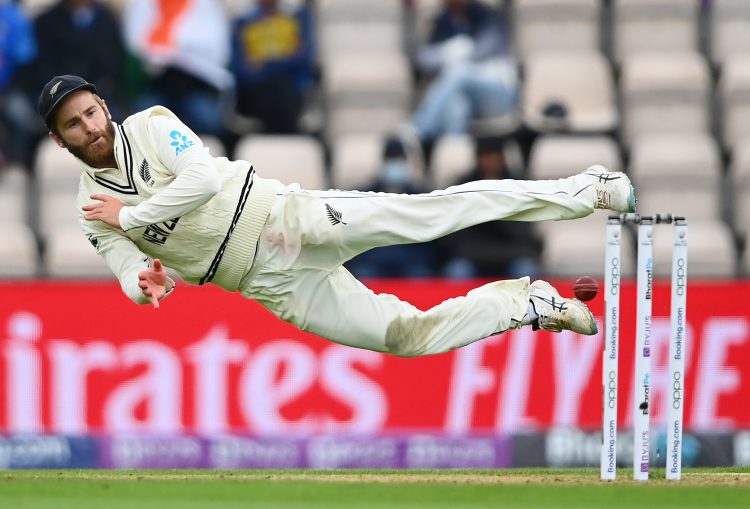 After rain played spoil-sport on day one, the World Test Championship finally got underway with India ending the day at 146-3 after being put in to bat by Kane Williamson at the Ageas Bowl in Southampton. After a solid start from the openers, Virat Kohli and Ajinkya Rahane put together an unbeaten partnership of 58 to put India in a solid position heading into day three.

With the clouds hanging low at the Hampshire bowl and conditions perfectly suited for seam-bowling, New Zealand opted to bowl first and make use of their pace quartet. The Indian openers got off to the perfect start, pressing forward and attacking any looseners from the Kiwis, making New Zealand wait till the 12th over until their first maiden.

The most dangerous bowler for the Black Caps in the opening session was Kyle Jamieson, whose extra bounce and awkward release point made life difficult for the Indian batsmen. Jamieson eventually got his reward and got the crucial wicket of Rohit Sharma – who looked in ominous touch – 30 minutes before the lunch break after luring him into a drive. His opening partner – Shubman Gill – followed soon after, edging Neil Wagner into the hands of BJ Watling to cap off a riveting opening session of the final.

New Zealand started the second session just like they finished the first, offering very little to the Indian batters. Colin de Grandhomme bowled 25 dot deliveries in a row post-lunch and the pressure finally got to the Indian batters, with Cheteshwar Pujara being trapped on the pads by Trent Boult after a nervy innings of 8 from 54 deliveries.

Despite the three quick wickets, Virat Kohli looked in imperious touch at the crease, soaking up the pressure created by the Kiwi quicks. The Indian captain continued to employ the strategies that served him well in his previous tour to England in 2018, standing outside of his crease to negate any seam or swing movement but playing the ball incredibly late.

The New Zealand bowlers toiled hard in the helpful conditions, but through a mixture of luck and some soft-hands from the Indian batters, were unable to find the edge. The Indian pair of Kohli and Rahane were happy to get through this tricky period without inflicting much damage, with India scoring only 51 runs at 1.8 runs per over in the afternoon session.

Despite their cautious approach, India crucially didn’t lose any more wickets and as bad-light ended the day’s play after only 64 overs bowled, the Men in Blue would be the happier of the two sides heading into day three.