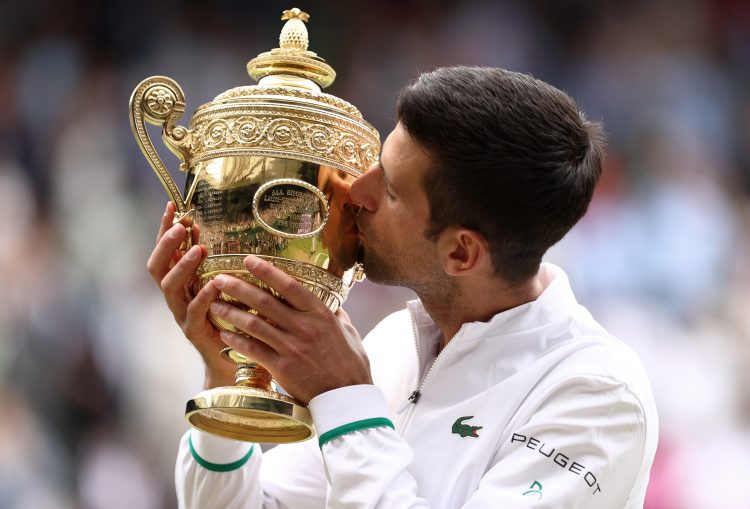 Novak Djokovic has created history at the All England Tennis Club after beating Matteo Berrettini 6-7 (4-7), 6-4, 6-4, 6-3 in three hours and 23 minutes to win the Men’s Singles Title at Wimbledon. The 34-year-old dominated the proceedings at Wimbledon in 2021, only dropping two sets throughout the competition on his way to his 6th Wimbledon title.

With this landmark victory, Djokovic has finally caught up with his great rivals and has now equalled Roger Federer and Rafael Nadal’s record of 20 Grand Slam titles. The three modern-day legends have continued to rewrite the history of the sport, and after Djokovic’s victory at Wimbledon, the trio have now won 60 of the last 72 Grand Slam Titles.

Djokovic even paid tribute to both Nadal and Federer after this victory. “I have to pay a great tribute to Rafa and Roger. They are legends of our sport and they are the two most important players that I ever faced in my career. They are the reason that I am where I am today” said Djokovic in the post-match interview.

The number one seed produced a masterclass of Tennis throughout the two weeks at Wimbledon, but his victory in the final was far from straightforward. It was a tense and passionate affair in front of 15,000 fans on Centre Court, with the Italian receiving plenty of support from the crowd.

Djokovic took the early break in this encounter and raced to a 5-2 lead as he targeted Berrettini’s backhand. However, the Italian recovered nicely after a nervy start and saved a set point to take the game to a tie-breaker which he won with a devastating ace.

However, as he has done throughout his career, Djokovic fought back immediately in the 2nd set and earned a double break to race to a 4-0 lead before eventually taking the set 6-4. Djokovic continued to lay down the charge in the third set with an early break at 2-1 which he didn’t relinquish.

Berrettini fought back hard in the fourth set but failed to capitalise and eventually gave Djokovic the decisive break at 3-3 with a double fault. Following his 6th Wimbledon title, Djokovic is now only the second man in the Open era after Rod Laver in 1969 to win the first three majors of the season and is now only a few steps away from creating some more history by becoming the first male player to complete a calendar golden slam.