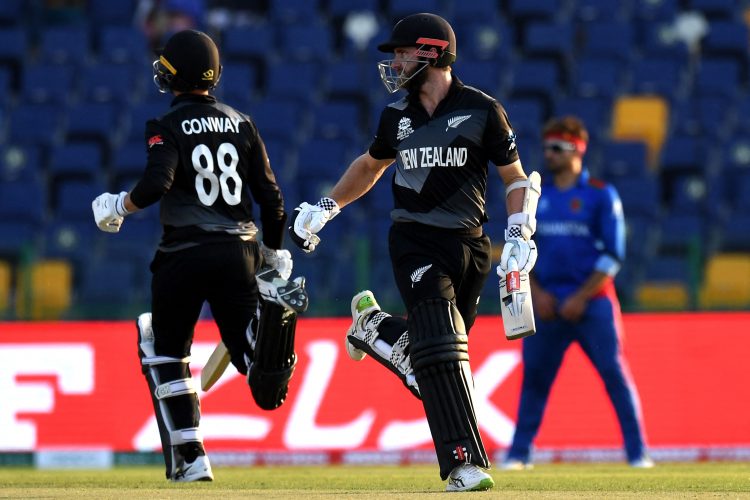 Once again, Kane Williamson’s New Zealand shattered a billion hopes in a major ICC event as the Blackcaps eased past Afghanistan in Abu Dhabi to seal their spot in the final four of the T20 World Cup. In the process, the Kiwis also eliminated Virat Kohli’s India from the competition, who required an Afghanistan victory to stand a chance of making the semi-finals.

In this must-win game, New Zealand executed their bowling plans to perfection, reducing Afghanistan to a modest 124 with the bat before Kane Williamson calmly guided the Blackcaps home in 18.1 overs to seal a comfortable victory.

After losing the toss, New Zealand struck early in the powerplay with fast bowling trio of Adam Milne, Trent Boult and Tim Southee picking up one wicket each. The Kiwis troubled the Afghani batters with their shorter lengths using their extra pace, and Adam Milne was the first to strike with the wicket of Mohammad Shahzad before Boult induced a leading edge from Zazai that ballooned to midwicket. Tim Southee got in on the action with the wicket of Rahmanullah Gurbaz, which left Afghanistan reeling at 19 for three inside the powerplay.

Najibullah Zadran led the recovery for Afghanistan, sharing two important partnerships with Gulbadin Naib and Mohammad Nabi that took the team to a more respectable total. The batters found things much more comfortable against the spin duo of Sodhi and Santner, with Zadran hitting the left-arm spinner for two sixes in an over on his way to a career-high score of 73 from 48.

Unfortunately for Afghanistan (and India), the pacers returned to wreak more havoc at the death, conceding only 33 runs off the final five overs, with Trent Boult removing Zadran and Karim Janat in the penultimate over and finishing with impressive figures of 3 for 17.

Afghanistan needed early wickets to stand a chance of defending this low score, but the Kiwi openers poured cold water over those hopes as they took the aggressive route. Daryll Mitchell hit three boundaries in the opening three overs before falling to Mujeeb, and Martin Guptill continued the onslaught to give the Blackcaps 45 runs in the powerplay. Rashid ended Guptill’s innings – and picked up his 400th T20 wicket – with a googly that crashed into the stumps, but Kane Williamson steadied the ship alongside Devon Conway.

The pair played risk-free cricket and put on a half-century partnership that eventually saw New Zealand home with 11 balls to spare. This is the Kiwi’s second consecutive appearance in the final four of the T20 World Cup, and Kane Williamson’s side will take on England in the semi-final in what will be a rematch of the iconic 2019 ODI World Cup Final at Lord’s.