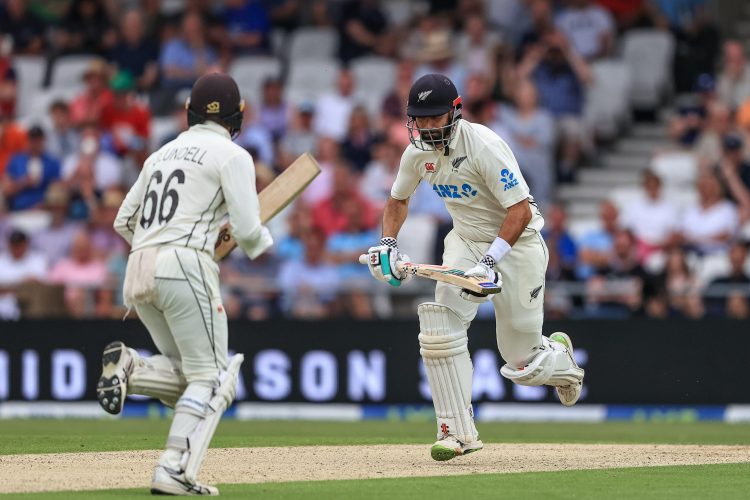 Day one of the third Test between England and New Zealand at Headingley kept in line with the theme of the series as Daryl Mitchell and Tom Blundell rescued the visitors once again after an early collapse. Mitchell and Blundell joined at the crease when New Zealand were in a spot of bother at 123 for five after choosing to bat first, but the pair allayed any fears and shared another century stand to end a gripping day’s play at 225 for five.

The Kiwis expected to enjoy prime batting conditions after winning the toss and asking England to bowl, but the Blackcaps got off to the worst start imaginable, with Stuart Broad removing Tom Latham in the first over of the match. Broad opened with the new ball in the absence of Jimmy Anderson – who was replaced by Jamie Overton in the side – and got the left-hander to half-heartedly poke at one outside off-stump, feathering a catch to Joe Root at first slip.

Broad also set up the Kiwi skipper Kane Williamson expertly before Lunch. The veteran seamer swung the ball sharply into Williamson’s pads before getting the next one to hold its line outside off-stump, making the New Zealand captain edge behind to Ben Foakes. Between those two dismissals, Jack Leach removed Will Young with his first ball of the day, with the opener missing a straighter one from the left-arm spinner.

Lunch was taken with New Zealand on 65 for three, and after unfurling some delightful cover drives throughout the afternoon, Devon Conway chopped on for 26 to give Jamie Overton his maiden Test scalp. New Zealand rebuilt through Daryl Mitchell and Henry Nicholls, but the latter lost his wicket in bizarre circumstances. The left-hander smashed Jack Leach down the ground, only for the ball to ricochet off the middle of the non-striker’s bat and balloon to the man at mid-off.

Nicholls’ unfortunate dismissal left the familiar duo of Mitchell and Blundell needing to rescue the Blackcaps once again, and after sharing partnerships of 195 and 236 in the first two tests, the pair added their third century stand of the series at Headingley. Mitchell used the sweep and reverse sweep to good effect against the spinners throughout his knock and brought up his 4th 50+ score in five innings with a towering six over long-off against Jack Leach.

Tom Blundell played with a familiar heir of solidity at the other end, finishing the day on 45* as both batters saw off ten overs of the second new ball with little fuss to guide the team to 225 for five at stumps.