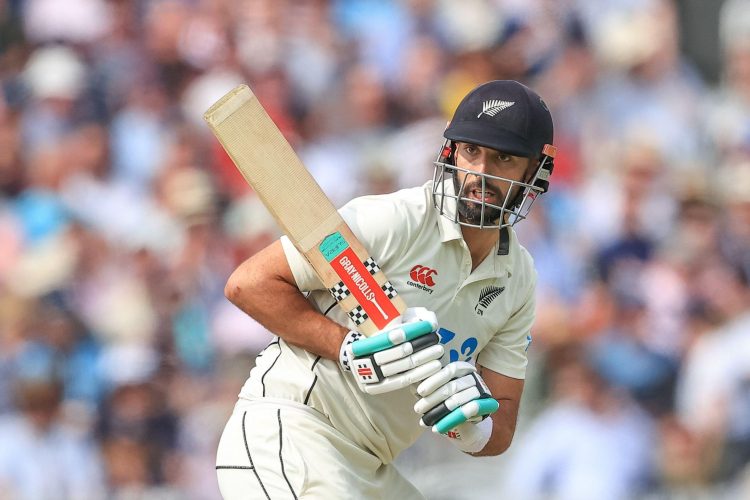 Powered by Daryl Mitchell’s incredible 190, New Zealand drove home their advantage on day two of the second Test at Trent Bridge in Nottingham. The visitors finished with a first-innings total of 553 – their highest on English soil – as Mitchell and Tom Blundell (106) added centuries while Michael Bracewell scored a fluent 49 on debut. The Blackcaps added to their advantage with the ball by removing Zak Crawley early on, but Ollie Pope steadied the ship with a fighting half-century alongside Alex Lees to see England finish the day on 90 for 1, trailing by 463 runs.

New Zealand resumed the day on 318 for four, and Daryl Mitchell and Tom Blundell continued to torment the English bowlers as they kept up their brisk scoring rate throughout the morning session. With very little assistance from the pitch and the England seamers straying in terms of their lines and lengths, it was a field day for the two Kiwi batters. Mitchell followed up his Lord’s special with back-to-back centuries, while Tom Blundell – who was dismissed on 96 in the 1st Test – became the first New Zealand wicket-keeper to score a red-ball ton in England.

England’s fielding woes carried over from day one with Matty Potts dropping Mitchell at long-on on 104 off Jack Leach, but the left-arm spinner eventually broke the 236-run stand as Blundell drilled one to mid-off. Mitchell continued to make the hosts toil after Blundell’s dismissal, adding a further 91 runs alongside Michael Bracewell.

The pair came swinging hard in the shortened post-Lunch session, with Bracewell kicking things off with two boundaries against Ben Stokes before 17 runs came off the subsequent Jack Leach over. After a well-composed innings of 49 which featured plenty of elegant shots, Bracewell edged to Joe Root at first slip to begin a flurry of New Zealand wickets. Stuart Broad dismissed Kyle Jamieson and Tim Southee in the same over, while Leach removed Matt Henry for a golden duck, leaving the Kiwis at 520 for nine.

Mitchell and Boult found some boundaries to take New Zealand past 550, but the number five was finally dismissed by Potts on 190, edging behind to Ben Foakes.

In response, England lost Zak Crawley in the second over of the innings, but Ollie Pope and Alex Lees saw out the rest of the evening without further damage, adding 84 runs before stumps. The Blackcaps dropped some chances of their own in the second innings as Daryl Mitchell put down Alex Lees on 12 at first slip before also spilling Ollie Pope in the cordon off Trent Boult. Just like Mitchell in the first-innings, Pope made the opposition pay for that miss as he switched through the gears excellently, pulling Matt Henry for two sixes before reaching his half-century with two fours off Kyle Jamieson near the close of play.