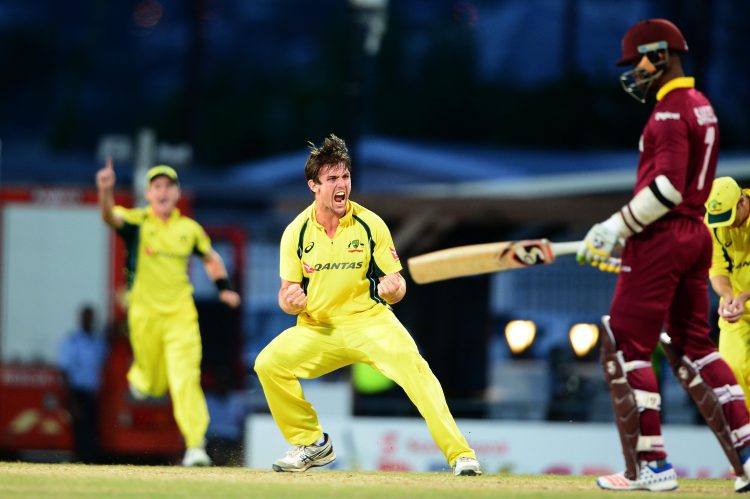 Despite losing the series, Australia fought back hard in the 4th T20I against West Indies to win a last-over thriller in St Lucia by four runs. Mitchell Marsh starred with both bat (75 off 44) and ball (3-24) while Mitchell Starc defended 11 runs off the final over to give Justin Langer’s side their first victory of the series.

Having won the toss and opted to bat, the Aussies lost Matthew Wade early on but still managed to get off to a flier and score 72 runs in the powerplay. Mitchell Marsh was the primary aggressor for Australia – smashing 25 runs in the 4th over off Oshane Thomas and clearing the boundary ropes with ease. Marsh has been a revelation for Australia at number three and reached his third half-century of the series off only 24 deliveries.

Aaron Finch provided good company to the all-rounder at the other end with the pair sharing a 114-run partnership for the second-wicket – a record for Australia in T20s. The Aussies scored 124 runs within the first 11 overs but were pegged back nicely by West Indies in the second half of the innings after another middle-order collapse which saw them finish with 189-6.

The West Indies threatened to make a mockery of the run-chase after a rocket start from the openers, with Lendl Simmons and Evin Lewis smashing 56 runs in the first four overs. However, Australia managed to pull things back nicely in the middle overs through Mitchell Marsh and Adam Zampa.

Zampa dismissed Evin Lewis in the powerplay and continued to use his variations to good effect while Mitchell Marsh finished with career-best figures of 3-24 and was incredibly difficult to get away with his slower deliveries.

Australia were firm favourites with 36 runs needed from two overs but Fabian Allen completely turned the tables with a 25-run penultimate over of Riley Meredith which included four towering sixes.

Allen’s heroics put the West Indies in the driver’s seat with Andre Russell on strike against Mitchell Starc with only 11 runs needed to go 4-0 up in the series. The left-armer has had a tough start to the series – conceding 89 runs with no wickets in his first two matches – but proved his class in the final over by conceding only 6 runs to give Australia the win. Starc fired in accurate yorkers’ and targeted the legs off Andre Russell, cramping him for room and bowling 5 dot balls in the over to give the Aussies a dramatic victory at the death.