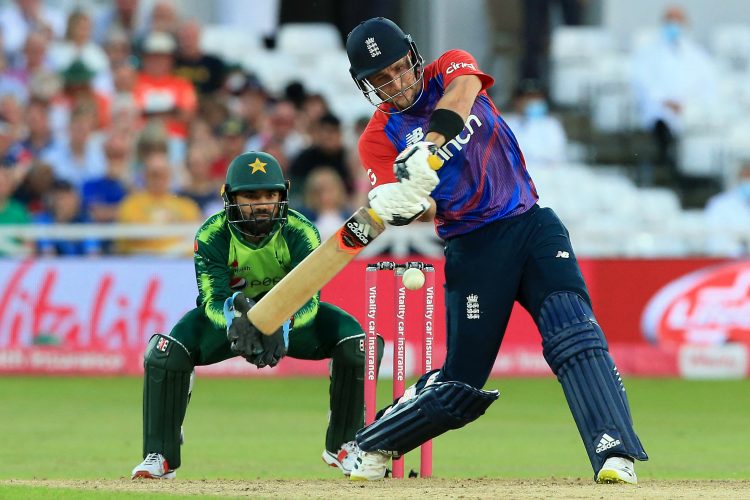 Liam Livingston smashed England’s fastest T20 century off 42 balls in the 1st T20I against Pakistan, but his efforts proved to be in vain as Pakistan won an exhilarating contest by 31 runs to go 1-0 up in the series. The 17,000 spectators at Trent Bridge were treated to an outstanding T20 spectacle with over 430 runs scored throughout the match.

Half-centuries from openers Babar Azam and Mohammad Rizwan propelled Pakistan to a first-innings total of 232, their highest in T20I history. England fought back hard through Liam Livingston but the visitors continued to pick up wickets at regular intervals and eventually bowled out Eoin Morgan’s side for 201.

The Pakistan openers got off to a solid start in the powerplay and continued to accelerate following the introduction of the spinners, stitching together a mammoth 150-run opening partnership.

Shoaib Maqsood (19 off 7), Fakhar Zaman (26 off 8) and Mohammed Hafeez (24 off 10) continued Pakistan’s momentum following the dismissal of both openers as Pakistan scored an astonishing 77 runs in the final 5 overs.

In their chase of 233, Jason Roy provided the acceleration inside the powerplay, taking the Pakistani bowlers to the cleaners and racing to 30 runs from only 10 deliveries after three 6s off Imad Wasim in the 3rd over. Unfortunately, Roy continued to lose partners at the end with Dawid Malan, Jonny Bairstow and Moeen Ali all departing inside the first five overs.

Ali’s dismissal brought Liam Livingston to the crease – sporting his new Phil Foden inspired bleach hairdo – and the all-rounder went after the bowling from the word go. Livingston smashed three boundaries off the last over of the powerplay before carting Shadab Khan for two sixes in a row one over later.

Livingston scored England’s fastest T20 half-century off only 17 deliveries and continued to keep England’s hopes alive after Eoin Morgan’s dismissal. Livingston brought up his 42-ball century with his ninth six off the innings, carting Shadab Khan over long on. Unfortunately, the Englishman couldn’t clear the same boundary one ball later and was caught by Shaheen Afridi, effectively ending England’s hopes of a historic victory.

Nevertheless, it was a phenomenal effort that Eoin Morgan described as equal to any innings seen from an England player in the last six years. Livingston’s heroics at Trent Bridge is another reminder of the depth in the English white-ball game and has given Eoin Morgan one more selection headache to worry about ahead of the T20 World Cup in October.

Livingston has now proven he is too good to leave out of the side and the Lancashire all-rounder also offers England an option with the ball and is a gun fielder with crucial experience in various T20 leagues across the world.