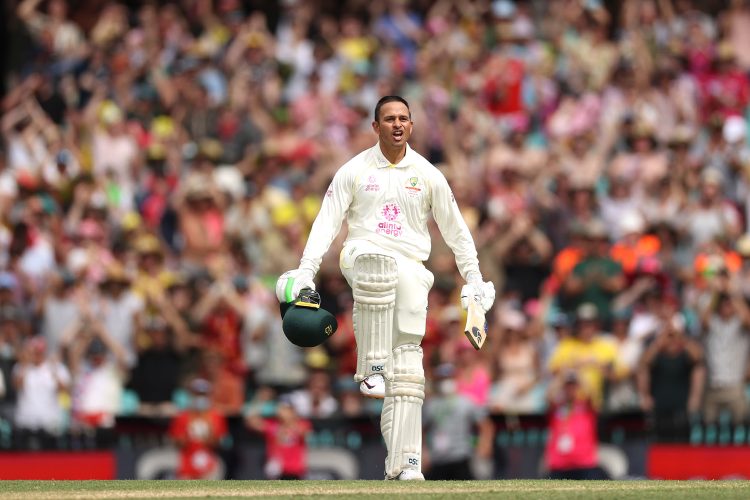 Day two of the fourth Ashes Test at the Sydney Cricket Ground followed a familiar script with the Australian batters piling on the runs while the English bowlers toiled hard in the sunshine to little avail. Playing in his first Test match in over two years, Usman Khawaja marked his return to the side with a sublime century to take Australia to 416 for eight declared in the first innings. The only solace in an otherwise disappointing day for the tourists was the reprieve offered to Zak Crawley, with Mitchell Starc dismissing the opener off a no-ball on the stroke of stumps.

The day began with a century partnership between Usman Khawaja and Steve Smith as England went wicketless in a stop-start opening session. While the rain sent the players off four times in the morning, the hosts didn’t let the constant breaks affect their batting rhythm and survived a testing examination from the English seamers when runs were coming at a premium.

However, apart from one dropped catch from Joe Root off Khawaja, the Australian batters offered nothing to the tourists before Lunch with Smith reaching his 6th consecutive Test half-century at his home ground. After the break, it was the new ball that did the trick for England with Stuart Broad bowling a fine spell to dismiss Steve Smith and Cameron Green in quick succession before Alex Carey skied a slog sweep off Joe Root for just 13. However, England found no way past the bat of Usman Khawaja, who punished the spinners with a flurry of sweeps and eventually reached his 9th Test century in the final over before Tea, bringing the SCG crowd to its feet.

Khawaja shared a 46-run partnership with Pat Cummins and added a further 67 alongside Mitchell Starc before Stuart Broad completed his five-wicket haul by getting the left-hander to chop one onto his stumps for 137. Nathan Lyon piled on the misery for England with two fours and a six to take Australia past 400 for the third time this series before Pat Cummins eventually declared late in the day with 416 on the board.

Having made England toil in the field for over 130 overs, Australia looked to make a few inroads before stumps with the new ball and had five overs before stumps to test the brittle English opening partnership. The hosts thought they had their man when Zak Crawley edged Mitchell Starc to David Warner at second slip. But the replays showed that the left-armer had marginally overstepped, allowing the visitors to end the day unscathed.