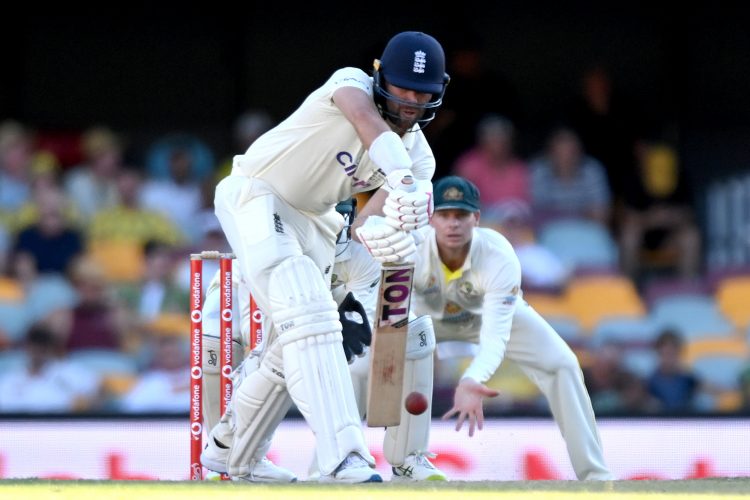 Dawid Malan and Joe Root shared an unbeaten 159-run stand for the third wicket to help England fightback on day three of the opening Ashes Test in Brisbane. The pair helped the visitors end the day on 220 for two and wipe out the majority of Australia’s 278-run first-innings lead that was built up by Travis Head in the morning session, with the batter scoring his second Test 150 to take Australia to a score of 425.

Root dominated the Australian bowlers and finished the day just 14 runs shy of his maiden Test ton down under while Dawid Malan scored a fluent 80* to cut down the deficit to just 58 runs at stumps.

In the opening session, Travis Head picked up from where he left off from the evening before, spraying the English bowlers to all parts of the Gabba as he passed 150. Head shared an important 85-run partnership with Mitchell Starc and helped the hosts add 82 runs to their overnight score before Mark Wood wrapped up the innings with the final two wickets.

The English openers survived a tense eight-over burst from the Aussie quicks before Lunch, but Rory Burns was dismissed by Pat Cummins in the first over after the break. The Australian captain got one to jump up viciously off a length and catch Burns’ glove on its way to the keeper. Haseeb Hameed showed a similar application as his knock in the first innings but gave his wicket away after getting a start, tickling a Mitchell Starc delivery down the leg side.

Hameed’s dismissal brought Joe Root to the crease alongside Malan at 61 for two, and the English captain was immediately greeted by Australia’s most threatening two bowlers, Josh Hazlewood and Pat Cummins. Showing patience and discipline, Root survived this opening examination before kickstarting England’s rebuild with some aggression against Mitchell Starc and Nathan Lyon, the two perceived weak links of the Australian bowling quartet.

Root utilised the conventional and reverse sweep to great effect against Lyon – who still couldn’t find the elusive 400th Test wicket – and played a couple of sumptuous drives off the left-armer. Through this innings, Root passed Michael Vaughan’s tally of 1481 to score the most runs by an English batter in a calendar year and became only the 8th batter in history to score over 1500 runs in a single year.

Root’s aggression allowed Dawid Malan to settle into his innings nicely, with the left-hander playing some elegant strokes through the off-side to score his fifth 50+ score in Tests in Australia.

The Australian bowlers struggled for the majority of the 70 overs, with Mitchell Starc losing his radar while Josh Hazlewood surprisingly bowled only eight overs in the day despite not facing any discernible issues.