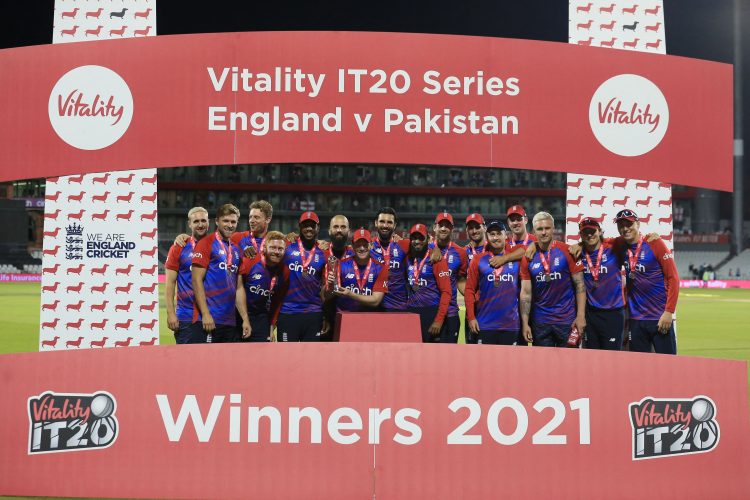 Eoin Morgan’s England sealed a 2-1 series victory against Pakistan after a nail-biting finish in the 3rd T20I at Old Trafford that went down to the very last over. The spinners dominated the proceedings in Manchester, and England restricted Pakistan to a modest total of 154 thanks to Adil Rashid’s 4-fer and some economical bowling from Moeen Ali. Jason Roy scored a swift 64 off 36 deliveries in the run chase, but the Pakistani spinners fought back in the middle overs to set up a grandstand finish with England finally crossing the line with only two balls to spare.

It was a slow and low track at Old Trafford that saw the spinners pick up 11 of the 13 wickets in the match. Pakistan started brightly through Mohammed Rizwan, but Adil Rashid picked up the crucial wicket of Babar Azam in the final over of the powerplay after the world’s number two ranked T20 batsman struggled to find his timing throughout the innings and misread the googly.

Rashid made more inroads into the Pakistani batting line-up in the ninth over, removing Shoaib Maqsood and Mohammed Hafeez. Adil Rashid, Moeen Ali and Liam Livingstone kept things tight throughout the middle overs with Pakistan finishing with 154 in the first innings thanks to Mohammed Rizwan’s unbeaten 76 and a late cameo from Hasan Ali.

England got off to a lightning start in the run-chase with Jason Roy taking 16 runs off Shaheen Afridi’s first over and making full use of the powerplay. At the other end, Jos Buttler failed to find his feet with a tentative knock of 21 from 22 balls. Fortunately for England, Jason Roy made up for Buttler’s struggles with a brilliant innings that included plenty of sweeps and reverse sweeps to counter the Pakistani spinners.

Roy raced to his half-century off 30 deliveries and England were cruising at the time of his dismissal, needing 63 runs from 56 balls. However, Roy’s wicket triggered a mini-collapse for England with Jonny Bairstow and Moeen Ali dismissed in quick succession by the Pakistani spinners.

England failed to find the boundary for three overs during that spell, but Eoin Morgan finally broke the shackles for the hosts and carted Hasan Ali for two sixes in the 18th over to ease the pressure.

Mohammad Hafeez dismissed Dawid Malan and Liam Livingstone in the penultimate over, but the latter’s massive six left England needing only six runs off the final over. Morgan eventually holed out to long-on with four runs still required, but Chris Jordan finished the job for England with two balls to spare to seal the 2-1 series victory.