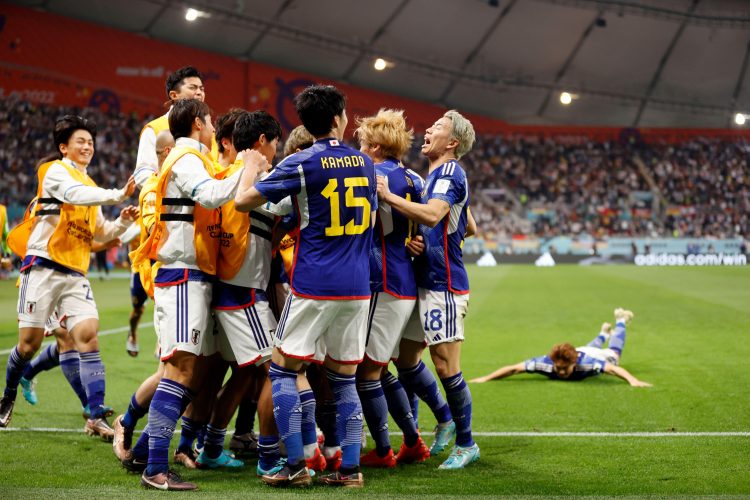 The 2022 FIFA World Cup kicked into life at the Khalifa International Stadium in Doha as Japan produced an incredible upset to beat Germany in their Group E opener. Ilkay Gundogan opened the scoring for Germany from the penalty spot in the first half, but goals from substitutes Ritsu Doan and Takuma Asano in the final 15 minutes helped Japan register a famous World Cup win against the four-time world champions.

The Asian side started the game on the front foot and had a goal ruled out for offside in the opening ten minutes, but Germany’s midfielders – Kimmich and Gundogan – started to control the proceedings as the half wore on. The Bayern Munich man had a long shot saved by Gonda before playing a sumptuous lofted through ball for left-back David Raum, who was fouled inside the penalty area by a clumsy challenge from the Japanese goalkeeper.

Ilkay Gundogan nonchalantly converted the spot kick by going down the middle, and Germany’s domination continued in the second period as they pinned the Japanese into their own half. The goal-scorer Gundogan struck the post, while Jamal Musiala skied one over the crossbar after a slaloming run past three defenders.

Japanese goalkeeper Gonda was even called to make four saves in the span of 20 seconds to deny Jonas Hoffman and Serge Gnabry, keeping his side in the contest. German shot-stopper Manuel Neuer made a wonder save of his own from Hiroki Sakai’s strike a few minutes later, and the German’s profligacy eventually came back to haunt them as Japan pressed forward and found the equaliser.

Ritsu Doan was first to react to the loose ball in the penalty area following Takumi Minamino’s effort, and the substitute made no mistake to level the scores at 1-1. Buoyed by the goal, Japan pushed forward in the closing stages and found the winning goal eight minutes later. Substitute Takuma Asano displayed tremendous skill and strength to bring down a long ball, and the former Arsenal man outmuscled German centre-back Nico Schlotterbeck before rifling a shot into the roof of the net from a tight angle to give Japan the lead.

Germany manufactured a few chances at the death to claw back a point, but Leon Goretzka fired wide four minutes into stoppage time as the 2014 champions slumped to a surprise defeat to start their World Cup campaign.

This loss leaves Germany on the brink of elimination. The four-time champions face 2010 winners Spain in their next encounter, and another defeat against their continental rivals will confirm their second consecutive World Cup group stage exit.