Jansen takes four as India bowled out for 202

Jansen takes four as India bowled out for 202 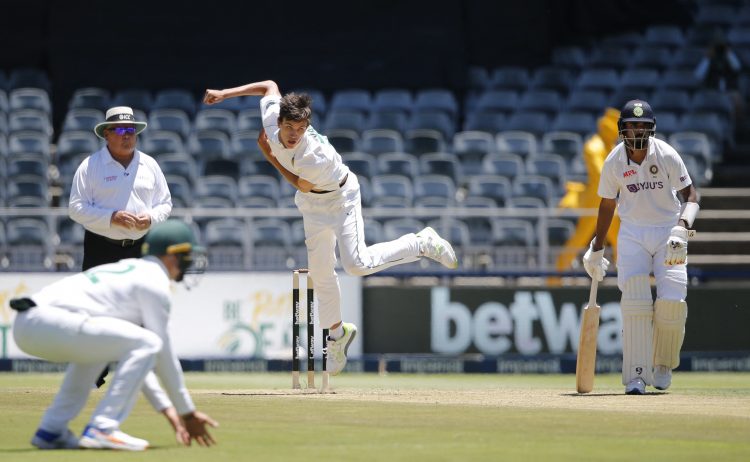 On a bouncy Wanderers pitch in Johannesburg, South Africa produced a fitting response to going 1-0 down in the series by bowling India out for just 202 on day one of the second Test. Marco Jansen picked up career-best figures of 4 for 31, while Kagiso Rabada and the returning Olivier picked up three wickets apiece to skittle an Indian batting lineup that was missing their captain and lynchpin, Virat Kohli, due to injury. India’s stand-in skipper KL Rahul and all-rounder Ravichandran Ashwin were the only two batters that looked fluent at the crease in an otherwise disappointing performance that saw the Men in Blue bowled out in just over 63 overs.

Having won the toss and opted to bat first, the Indian openers were inching towards a similar performance as the first Test in Centurion, with Mayank Agarwal and KL Rahul seeing off the tricky first hour of play and finding the occasional boundary.

However, the Proteas were much improved in their line and length at the Wanderers and struck immediately after the drinks break, with Marco Jansen angling one away from Mayank Agarwal and finding the outside edge. Jansen conceded just eight runs from his first nine overs of the day, asking plenty of questions to the Indian batters with his extra pace and bounce.

Without Virat Kohli in the playing XI, the onus was on India’s veteran duo of Cheteshwar Pujara and Ajinkya Rahane to do the heavy lifting in the middle order. However, both batters continued their poor run of form in the side, falling on consecutive deliveries against Duane Olivier to increase the scrutiny over their spot in the XI.

KL Rahul and Hanuma Vihari staged a brief revival after Lunch, but their 42-run stand was cut short by an excellent piece of fielding by Rassie van der Dussen at short-leg, stretching out to his left to grab a one-handed stunner to dismiss Vihari. Rahul carried on his good form from Centurion to score another half-century, but the Indian captain fell just after reaching his milestone, top-edging a pull-shot off Marco Jansen and holing out to Lungi Ngidi at deep fine leg.

Jansen also dismissed Rishabh Pant with a delivery that angled in and caught the inside edge while Duane Olivier removed Shardul Thakur for a duck to reduce India to 157 for seven. Ravichandran Ashwin provided some crucial lower-order runs to take India to a more competitive total, but his luck ran out four runs shy of a half-century with the all-rounder mistiming an uppercut to give Jansen his fourth. Jasprit Bumrah scored 14 runs off one Kagiso Rabada over to take the Men in Blue past 200 before the South African pacer wrapped up the innings with the final wicket of Siraj.

Having bowled India out for 202, the hosts were forced to play out 18 testing overs against the new ball before stumps. While Mohammad Shami dismissed Aiden Markram for the third time in three innings with a nip-backer, South Africa survived the opening onslaught for the loss of just one wicket, ending a productive opening day with a first innings deficit of just 167 runs.