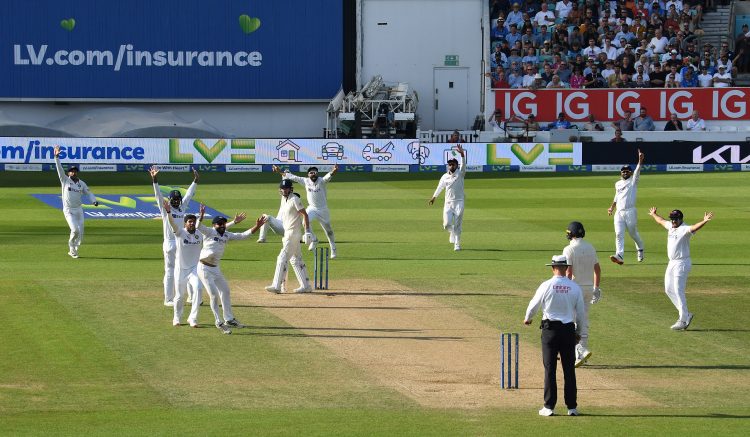 The Indian juggernaut continues to roll on after Virat Kohli’s side produced another inspired performance on Day five at the Oval to win the fourth Test by 157 runs. Fantastic contributions from Jasprit Bumrah (2-27), Ravindra Jadeja (2-50) and Shardul Thakur (2-22) set up India’s victory on the final day as the hosts were rolled over in the fourth innings for 210. Chasing a target of 368 England’s batting line-up disintegrated after Lunch on a flat deck to give India a 2-1 series lead heading into the final Test.

The day began with all three results still possible, but the game turned on its head after a stunning spell of reverse swing from Jasprit Bumrah in the afternoon, which broke the back of the English batting line-up and helped India win multiple tests on an English tour for the first time since 1986.

England began the day at 77-0 with 291 runs still to get, and the openers got off to a measured start as they reached their century partnership. The Indians, however, were incredibly accurate with their line and length throughout their morning, and Shardul Thakur removed Burns off his first ball of the innings with a lovely delivery that seamed away and caught the outside edge.

Dawid Malan departed soon after as Haseeb Hameed misjudged a single that left Malan stranded as Rishabh Pant whipped off the bails after some quick work from Mayank Agarwal at cover.

England scored only 54 runs in the morning session – due to the unerring accuracy from India – but looked to up the pace after Lunch with Joe Root at the crease. Unfortunately for the hosts, Hameed was bowled soon after the break as he exposed his stumps against a delivery from Jadeja that spun sharply from the rough and crashed into off-stump.

Hameed’s dismissal opened the floodgates for India as Jasprit Bumrah went on to produce one of the great spells in recent times to remove both Ollie Pope and Jonny Bairstow. Bumrah was breathing fire with his reverse swing and sent Pope’s stumps flying with a ball that tailed in before nailing a pinpoint yorker that removed Bairstow for a duck. Moeen Ali didn’t last too long either as he edged a Jadeja delivery to short leg to leave England reeling at 147/6.

Root and Woakes steadied the ship briefly, but Shardul Thakur returned to produce the key breakthrough as Root chopped onto his stumps before Tea. From that point on, victory was all but guaranteed as Umesh Yadav ran through the rest of the tail with some searing pace to give India a famous victory at the Oval by 157 runs.

It was a high-class performance from Virat Kohli’s side on the final day and the Men in Blue deservedly take a 2-1 lead in this series ahead of the fifth and final Test at Old Trafford in Manchester.