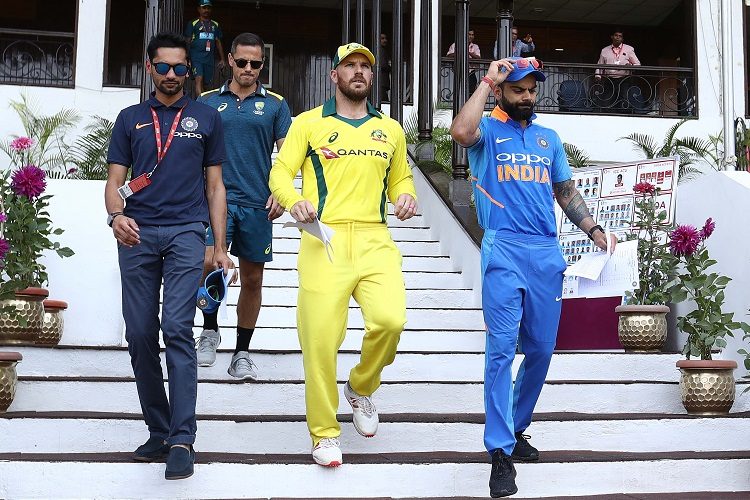 NAGPUR, INDIA - MARCH 05: Aaron Finch of Australia and Virat Kohli of India head out for the coin toss during game two of the One Day International series between India and Australia at Vidarbha Cricket Association Ground on March 05, 2019 in Nagpur, India. (Photo by Robert Cianflone/Getty Images)

This is a bit of a random series in that it’s a one-day international series out of nowhere in a calendar filled with T20Is ahead of the T20 World Cup next year. But it is what it is.

Australia and India will meet in an ODI for the first time since the ICC Cricket World Cup 2019, and as good a contest it is that these two teams usually produce, there is scope to wonder what the point of it all is.

In fact, the team Australia have sent for the tour is telling. The squad will be missing the likes of Marcus Stoinis, Glenn Maxwell and Shaun Marsh, all of who have been setting the BBL alight so far this season.

Instead, the three all-rounders will remain in Australia to boost their marquee T20 tournament, with the likes of Peter Handscomb and Ashton Turned filling in their places. That said, this is still quite a strong squad Australia have sent, right from David Warner at the top, followed by Marnus Labuschagne and Steve Smith, and all of Pat Cummins, Mitch Starc and Kane Richardson taking the ball.

India will not be daunted, not by any means. They are still the No.2-ranked ODI team in the world, possessing incredible resources, and they have named a side that is as close to full-strength as possible, given injury restrictions.

The big question, as has been the case for a while now, surrounding India will be the identity of their No.4 batsman – Shreyas Iyer looks primed to fill the slot, but Rishabh Pant seems to be fancied by the management in the role. Another question is who will open the innings alongside Rohit Sharma, with both KL Rahul and Shikhar Dhawan vying for the role.

The answers should be interesting, even if irrelevant immediately.

Australia are one side India haven’t really lorded over. Australia have won 77 of their 137 ODIs against India, who have won 50. In fact, India have lost three of their last four ODIs against Australia, the only victory coming in the World Cup.

KL Rahul (India): Rahul has been in decent nick recently, especially after Dhawan suffered an injury and he was asked to fill in. In his last nine internationals innings, including six T20Is and three ODIs, Rahul has scored four half-centuries and a century. Keep up this form, and he’ll keep Dhawan out of the side.

Marnus Labuschagne (Australia): Labuschagne has been a revelation for Australia in Test cricket in 2019, shooting up the run charts and the batsmen’s rankings. Ahead of this series, he has expressed his wish to become an all-format star like India captain Virat Kohli. Can he do that in the Indian champion’s backyard? It should make for interesting viewing.

India to build on their recent wins and notch up another.