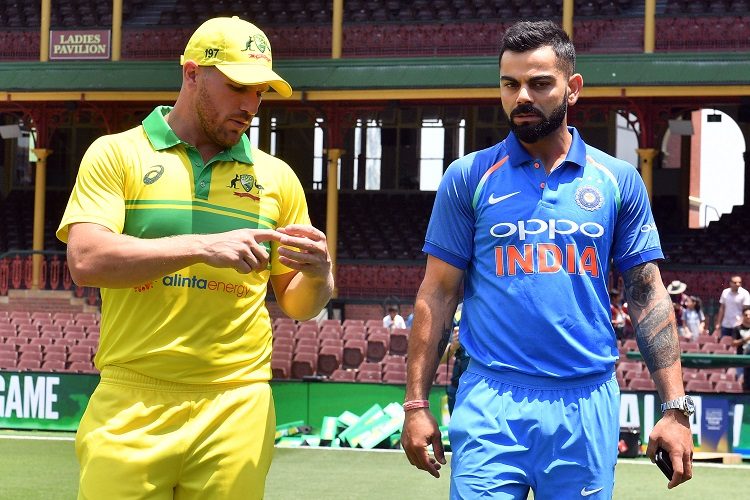 India and Australia contested keenly in Australia a couple of months back in a three-match Twenty20 International series, which ended in a 1-1 draw. Australia weren’t at their strongest – the absence of David Warner and Steven Smith through suspension have been well-documented – and India were just about acclimatising to conditions Down Under at the start of their tour.

If anything, India are a lot stronger now, playing at home, and Australia are still missing Warner and Smith. India are favourites for this short, two-match series, but Australia have a decent side and will look to provide the hosts a run for their money.

Australia’s last T20I series was against India in November. As mentioned above, they drew the series 1-1, but the series could have easily gone India’s win had the second T20I in Melbourne not been rained out – India had Australia reduced to 132/7 in the 19 overs that were possible.

Thereafter, India went on to secure a historic 2-1 in the Tests, and also secured the ODIs 2-1. By the end of the tour, Australia were pretty much sick of the sight of India. They did ease past Sri Lanka in the Tests to boost their confidence a bit, but it remains to be seen how much India’s exploits in their backyard have left a mark on Australia.

India, meanwhile, have looked decent in their travels. They won the ODIs in New Zealand 4-1, with what was at times an experimentative squad – they played the last two matches without Virat Kohli – and just about missed out on the T20Is, beaten 1-2 by New Zealand after the home side won in Hamilton by 4 runs.

In the short history of T20I cricket, India and Australia have clashed 18 times overall. It’s perhaps reflective of Australia’s T20I rankings – No. 5 in the world, behind Pakistan, India, South Africa and England – that they have lost 11 times in those clashes.

In India, it gets even worse for Australia. There have been 5 matches played between the two sides since 2007, of which India have won 4. Their only loss came in Guwahati in October 2017, when Jason Behrendoff’s 4/21 and Moises Henriques’ 46-ball 62 took it away from the home side.

Australia are up against it.

Aaron Finch, the Australia captain, has been desperately out of form, and the Indian bowlers will lick their lips at the prospect of bowling to him at the moment. In his last 10 outings, including in the BBL, he has managed just one fifty.

Wrist-spin has becoming utterly important in limited-overs cricket, and that makes Adam Zampa’s role crucial for Australia. Can he be the star spinner in the series, especially given India have rested Kuldeep Yadav for the series?

India will welcome back their captain, Virat Kohli. The batting virtuoso took a much-needed break – he played just three of the eight matches in New Zealand – and with the World Cup fast approaching, he’ll be keen to work himself back into rhythm and form, and position himself in such a way that he peaks at the big event.

Jasprit Bumrah is also returning after a long break, and after a year in which he shot to prominence – he’s already become undroppable for India in Tests – he will be primed to go. With all that pace, those yorkers and that zing, Bumrah could prove potent against an Australian line-up that hasn’t yet given the impression it’s settled.

History in the format, quality in the teams, location of matches, everything points to one winner – India.