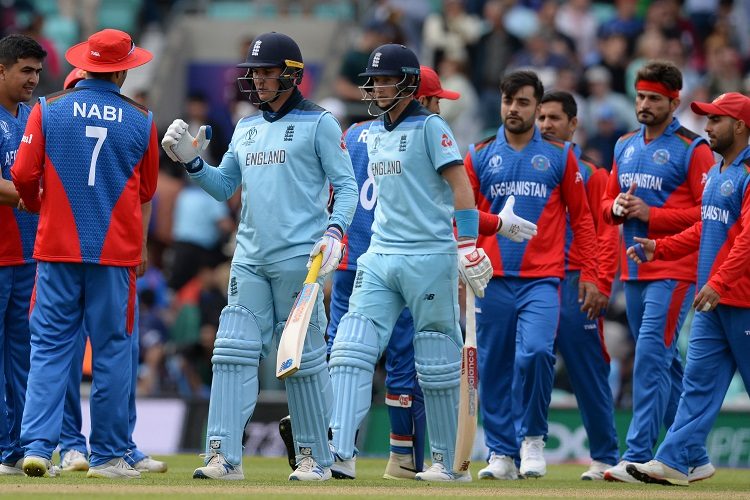 At the halfway stage of the World Cup, one would have expected England to top the points table. That they haven’t and are only placed No. 4 shows that it hasn’t been England’s World Cup to lose – at least not yet. But that could change soon as the hosts clash against Afghanistan, a team that’s yet to win a game and has struggled against most of the teams they have faced, at Old Trafford on Tuesday, June 18.

England come into this game after having beaten the West Indies quite comprehensively in their last outing on the back of an unbeaten hundred from Joe Root. And while Root’s dominance and the bowlers’ penetration job was commendable – England bowled out their opponents for 213 – the injuries to opener Jason Roy and captain Eoin Morgan are concerning. Roy is most likely to miss the next two games due to a left hamstring injury he picked up while fielding in the West Indies game and Morgan has a back spasm that may force him to sit out of this game.

Yet, England have like-for-like replacements for the duo in their squad should any of them not be available. James Vince, who was one of the substitutes for Roy in the field, may replace him at the top of the order while Moeen Ali, who has sat out of the team’s last two matches, may be brought back in place of Morgan. Jos Buttler, the vice-captain, is likely to lead the side.

While England have injury concerns, those are probably the only issues on their mind right now whereas Afghanistan have a lot to ponder over. Afghanistan failed to cross 200 for the third successive time when they were bowled out for 125 against South Africa.

And if one accounts the injury issues that have plagued the South African bowling attack in this tournament, England are going to present an even tougher challenge with the ball. The Afghan middle order was a shambles – scores from Nos. 3 to 7 read 6, 8, 0, 1, 9 – and had it not been for Rashid Khan’s 25-ball 35 at No. 9 Afghanistan would not have crossed the 100-run mark.

The bowlers haven’t fared much better either. Khan gave away more than he scored and Afghanistan managed to pick up only one wicket as South Africa strolled on their way to victory. The Afghans need a turnaround and they’ll have to bring out their best cricket to beat the tournament favourites.

Afghanistan and England have only played one ODI before – in the 2015 World Cup – where England romped home by 9 wickets after restricting the Afghans to 111/7 in a rain-affected encounter. The teams also met in a World Cup warm-up game last month at The Oval where England bowled Afghanistan out for 160 before winning by 9 wickets.

Mohammad Nabi (Afghanistan): In times of peril, teams turn to their most experienced players and this is Nabi’s chance to help reinstate his team to a position from where they could challenge teams in the remainder of their matches. He picked up three wickets in an over against Sri Lanka; a repeat of such a feat could put the weakened England line-up under pressure.

Joe Root (England): Root has been consistent and dominant. His century against the West Indies came off just 94 balls and it was his second ton in the tournament – he got one against Pakistan as well. Afghanistan should be wary.

Rampaging England prove out to be too strong for Afghanistan.