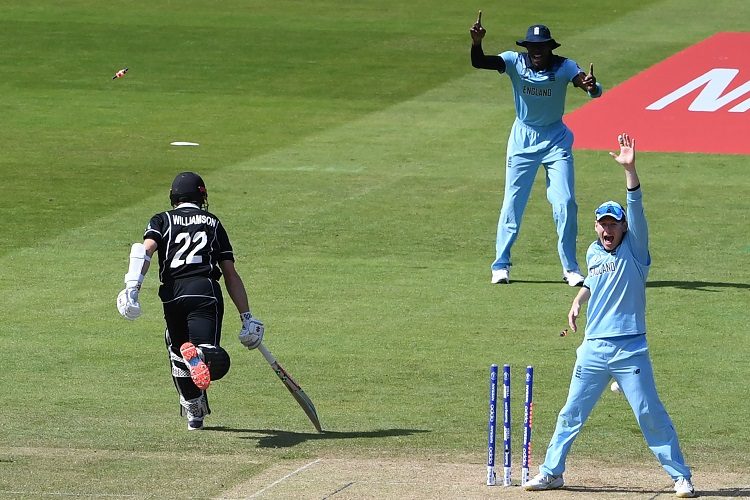 England and New Zealand will meet in the final of the 2019 World Cup at Lord’s, on July 14. Neither side has won the World Cup before, nor has any new side since 1996, which makes the contest even more eagerly awaited. Ahead of the match, here is a statistical preview.

0 World Cups for both England and New Zealand. Whoever will be the 6th side to win the World Cup, after Australia (5 times), West Indies (twice), India (twice), Pakistan, and Sri Lanka.

0.888 England’s win-loss ratio at Lord’s (24 wins, 27 defeats), their worst on any home ground. In fact, Lord’s is the only home ground where England have lost more ODIs than won.

1 World Cup knockout match between England and New Zealand till date, in the 1979 semi-final. England had won by 9 runs.

1 hundred needed by Eoin Morgan (12) to go past with Marcus Trescothick. For England, only Joe Root (16) has more. Morgan has another hundred, for Ireland.

1.5 win-loss ratio of England against New Zealand in this decade (12 wins, 8 defeats).

2 five-wicket hauls for Adil Rashid, the joint 2nd-most for England. Chris Woakes has most (3).

3 New Zealand’s win-loss ratio at Lord’s (3 wins, 1 defeat), their best on any English ground where they have played 4 or more decided matches.

3 hundreds needed by Root, the most for England in World Cup history. Jonny Bairstow is joint 2nd, with 2.

3 wickets needed by Mark Wood (17) to become the leading wicket-taker for England in a single series or tournament. Jofra Archer (19 wickets in this World Cup) holds the record.

3 dismissals needed by Jos Buttler (11 catches, 2 stumpings) to go past Matt Prior (14 catches, 1 stumping in the 2007 NatWest Series) register the 2nd-most dismissals for an England wicketkeeper in a single series or tournament. The record lies with Geraint Jones (20 catches in the 2005 NatWest Series).

4 World Cup finals at Lord’s till date. This will be the 5th. Melbourne Cricket Ground is the only other ground to have hosted more than one World Cup final, in 1992 and 2015.

4 four-wicket hauls in World Cup cricket for Trent Boult, the joint 3rd most. Only Mitchell Starc (6) and Imran Tahir (5) have more.

4 World Cup ducks for Morgan. Only Astle and Ijaz Ahmed (5 each) have more.

5 five-wicket hauls for Boult, joint most among New Zealanders. Richard Hadlee also has 5.

5 hundreds for Ross Taylor against England, the joint 2nd most. Another hundred will take him past Mahela Jayawardene and Ricky Ponting. Only Aaron Finch (7) has more.

9 World Cup matches between England and New Zealand. New Zealand hold a 5-4 lead: England had won the first 3 matches; New Zealand the next 5; and England the most recent one, in a league match of this edition at Chester-le-Street.

12 four-wicket hauls for Woakes, the 2nd-most for England, after James Anderson (13).

13 World Cup catches for Martin Guptill. He is tied with Jacob Oram and Styris. Among New Zealanders, only Chris Cairns (16) has held most catches among non-wicketkeepers.

13 matches as captain for Morgan in England-New Zealand clashes, the joint most. On Sunday, Morgan will go past Bob Willis, Geoff Howarth, and McCullum.

15 runs needed by Root (549) to become the leading run-scorer for England in a single series or tournament. David Gower (563 in the 1982-83 Benson & Hedges World Series Cup) holds the record. Jonny Bairstow has 496 runs here.

16 hundreds for Guptill, the joint 2nd most in New Zealand history. Astle also has 16. Taylor (20) has the most.

23 years since a new team has won the World Cup, since Sri Lanka had lifted the trophy in 1996. The first six editions, on the other hand, witnessed five champions.

27 years since England had played a World Cup final. Having qualified for the final thrice in the first editions, England had failed to do the same in the next six. New Zealand’s only appearance was in the last edition.

49 fifty-plus scores for Root (16 hundreds, 33 fifties). He needs one more to become the 2nd to score fifty fifties for England. Only Morgan (12 hundreds, 41 fifties) has more. Morgan also has a hundred and 5 fifties for Ireland.

71.73 batting average of Williamson on English soil, the highest for anyone with a 500-run cut-off.

987 World Cup runs for Taylor and 976 for Guptill. Taylor needs 89 and Guptill 100 to go past Fleming (1,075) and become the leading run-scorer for New Zealand in World Cup cricket. Fleming is also the only New Zealander to have crossed the 1,000-run mark.