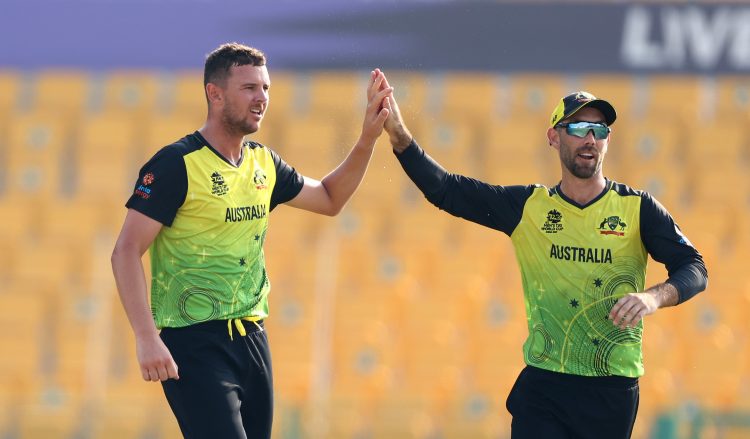 Australia sealed their passage into the final four of the T20 World Cup with a clinical eight-wicket win over the West Indies in their final Group 1 clash in Abu Dhabi. Josh Hazlewood continued his fine form in the tournament with a four-wicket haul that limited the West Indies to 157, before half-centuries from David Warner (89* off 56) and Mitchell Marsh (53 off 32) took Australia to victory inside 17 overs.

This dominant performance from Australia also signalled the end of an era for the West Indies, as the two-time World Champions bid goodbye to T20 stalwarts such as Dwayne Bravo and Chris Gayle and will now also be forced to play the first round of the next T20 World Cup in 2022 to qualify for the Super 12s.

After being put in to bat, the Men in Maroon got off to a fast start in the powerplay, with left-handers Lewis and Gayle taking 20 runs off the second over from Josh Hazlewood. However, Australia hit back immediately with Gayle chopping on against Pat Cummins before Hazlewood removed Pooran and Roston Chase in his second over with some classic Test-match line and lengths.

Australia tightened the screws after the early breakthroughs, as Adam Zampa followed up his five-wicket haul against Bangladesh with another economical middle-overs spell. Zampa conceded only 20 runs to go along with the wicket of Evin Lewis, and the West Indies hit only three boundaries in the eight overs after the powerplay, slipping to 99 for five after 15.

Kieron Pollard has endured a quiet tournament so far, but the captain’s 44 from 31 provided some much-needed impetus in the death overs before Andre Russell deposited the final two deliveries into the stands to push the West Indies total to 157.

David Warner led the charge for Australia in the run chase and powered the team home with a 124-run partnership alongside Mitchell Marsh. Australia lost their captain Aaron Finch early on to Akeal Hosein, but the left-right combination of Marsh and Warner punished the West Indies bowling attack to chase down the score in 16.2 overs. Warner was back to his best as he went after Jason Holder for two fours and a six before slog-sweeping Akeal Hosein over the ropes to give Australia 53 in the powerplay.

Warner raced to a half-century off only 29 deliveries, and the opener was given good company by Mitchell Marsh, who continued his good form against the West Indies from earlier this year. Marsh hit three consecutive boundaries off Andre Russell and brought up his half-century off 28 deliveries before eventually falling to Chris Gayle with only one run needed for the victory.