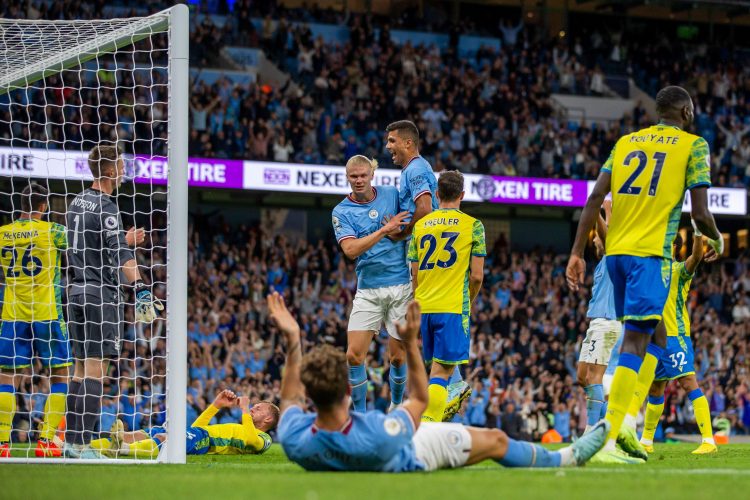 Erling Haaland’s blistering start to life in the Premier League continued on Wednesday night at the Etihad Stadium as the Norwegian scored his second hat-trick for the club in five days in a thumping 6-0 victory over Nottingham Forest. Three goals in 26 minutes from the 22-year-old set up a commanding win for the defending champions over the newly promoted side while also taking Haaland’s tally to nine goals in five league games since his summer arrival from Borussia Dortmund.

Following their thrilling 4-2-win comeback over Crystal Palace at the weekend, Pep Guardiola made two changes to the Manchester City lineup, with Ilkay Gundogan replacing Kevin de Bruyne and Riyad Mahrez making way for Julian Alvarez. Haaland retained his place in the side at centre-forward, and the striker carried on from where he left off against the Eagles to score back-to-back hat-tricks in front of the home fans.

It took just 12 minutes for the Norwegian to open the scoring, with Haaland outmuscling Joe Worrall from a set-piece and redirecting Phil Foden’s cross into the back of the net. His second came just ten minutes later, with the striker finding himself in the right place at the right time once again. Dean Henderson’s poor pass was intercepted by Bernardo Silva on the edge of the box, and after some neat interplay with Phil Foden, Haaland passed the ball into an empty net to double City’s advantage.

The 22-year-old added a third in the first half with another simple finish from close range, out-leaping the Forest defenders to head home and complete a perfect hat-trick. City were in cruise control against Steve Cooper’s side following Haaland’s treble, and after Julian Alvarez struck the post with a stinging shot, Joao Cancelo made it four for the hosts with a stunning strike from the edge of the area.

City’s other star summer signing, Julian Alvarez, later put the icing on the cake of the performance with a second-half brace. The Argentine grabbed his first league goal with a predatory finish in between Dean Henderson’s legs before doubling his tally in the 87th minute with another unstoppable strike into the top corner to make it 6-0.

With this performance, Erling Haaland becomes the first player to score nine league goals and two hat tricks in their first five appearances in the Premier League. The Norwegian has adapted seamlessly to the English game and considering his unrelenting form, Manchester City and Pep Guardiola seem the favourites to lift the Premier League trophy for the third campaign in a row this season.