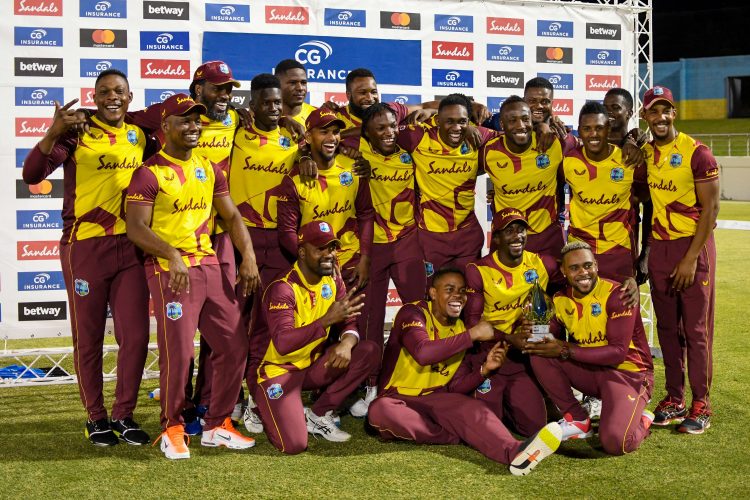 After losing the T20I series against South Africa at home, the West Indies bounced back nicely against Australia to register a 4-1 series victory in St Lucia. Evin Lewis starred for the hosts in the final encounter with a stunning 34-ball 79 that included nine sixes and propelled the West Indies to a first-innings total of 199. Australia got off to a great start in the powerplay, but wickets in the middle overs once again proved to be their undoing, handing Nicholas Pooran’s side a comfortable victory in the 5th T20I.

After winning the toss and choosing to bat, the West Indies made a lightning start to their innings after a blitzkrieg from Evin Lewis at the top of the order. Lewis received good support from Chris Gayle, and the pair of them smashed 41 runs in the final two overs of the powerplay, helping the hosts score an emphatic 81 runs from the first six overs.

Gayle was eventually dismissed by Mitchell Swepson, but Lewis continued his assault on the Aussie bowlers, smashing four sixes in a row after reaching his half-century. The left-hander was eventually dismissed for 79 by Marsh in the 11th over, which helped Australia mount a comeback in the second half of the innings with the ball, restricting West Indies to 199 after conceding only 30 runs in the final five overs.

Chasing 200 to win, Australia made a swift start to their innings despite losing Josh Philippe in the first over. Mitchell Marsh has been a revelation at number three in this series, and the all-rounder once again provided the Aussies with some firepower at the top of the order – scoring a brisk 15-ball 30 before chipping a drive straight back to Russell in the 5th over.

Aaron Finch and Moises Henriques continued the momentum created by Marsh, but both batters were dismissed in the 10th over by some excellent fielding by the West Indies. Finch was removed by an outstanding one-handed catch in the deep by Fabian Allen while Henriques was run-out by a brilliant direct-hit from Nicholas Pooran.

Australia’s middle-order has been their Achilles heel right throughout this series, and the tourists once again lost their way after a fast start, finishing 16 runs short of their target.

While plenty of Australia’s big names including David Warner, Pat Cummins, Glenn Maxwell and Steve Smith were absent for this series, the tourists will leave the Caribbean with more questions than answers ahead of the ICC T20 World Cup in October.

The one positive to come out of these matches for Australia has been the performances of Mitchell Marsh with both bat and ball. The all-rounder scored 219 runs from number 3 with a strike rate of 152 while also taking 8 wickets at 11.0 with a healthy economy rate of only 6.7.