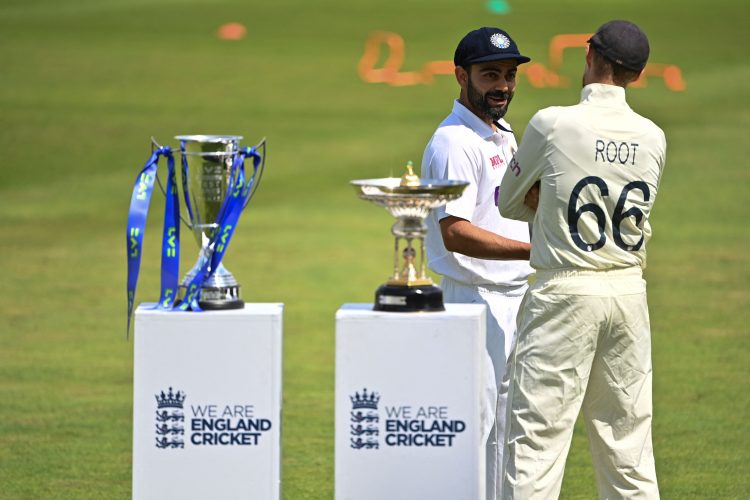 The Test series between England and India is tantalisingly poised ahead of the final two games at the Oval and Old Trafford. Both sides head back down to London with one victory apiece and given the see-saw nature of the first three Tests, it’s difficult to predict which team will come out on top in the series. England looked disconsolate after their defeat on Day five at Lord’s, but Joe Root’s side produced a commanding performance at Headingley to win by an innings and 76 runs to level the series at 1-1.

India, on the other hand, will be incredibly disappointed by their poor showing in Leeds. The Men in Blue collapsed for 78 in the first innings and lost eight wickets for 63 runs on the 4th morning to hand Virat Kohli only his 2nd innings defeat as captain in Tests.

The major talking point ahead of the final two tests is the contrasting form of the two respective captains – Joe Root and Virat Kohli. The Englishman has just overtaken Kane Williamson to become the ICC world number one ranked Test batter after his 3rd consecutive century of the series and sixth of 2021 at Headingley. Conversely, Kohli is going through his worst phase as a batter in international cricket after now going nearly 50 innings without reaching triple figures. Kohli averages 25 in this series compared to Root’s 127 and will have to correct his issues with balls outside off-stump if India wish to win their first series in England since 2007.

With the final three Tests played back-to-back, there are expected to be some changes in both sides ahead of the encounter at the Oval.

Ravichandran Ashwin is likely to make his way back into the India starting XI at the expense of Ishant Sharma, while Ravindra Jadeja has been passed fit after some injury concerns in the 3rd Test.

For England, the major news is the absence of vice-captain Jos Buttler who will miss the penultimate Test of the series due to his wife expecting their second child. Sam Billings has been roped into the squad as his replacement, and either Ollie Pope or Dan Lawrence are expected to replace Buttler at number six with Bairstow taking the gloves.

Chris Woakes and Mark Wood also return to the squad after recovering from their respective injuries, and could either one could come into the side at the expense of Sam Curran – who is averaging 79 with the ball so far this series.