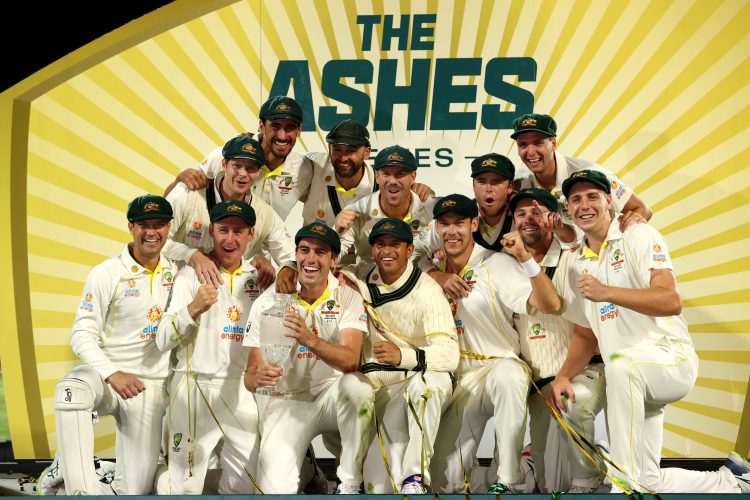 Day three of the fifth Ashes Test began with some hope of a consolation English victory in Hobart before eventually descending into chaos as the visitors lost all their final ten wickets in the space of 22.5 overs. Chasing a target of 271, England collapsed from 68 for no loss to 124 all-out as Pat Cummins, Scott Boland and Cameron Green picked up three wickets apiece to give Australia a 146-run victory which completed a 4-0 Ashes rout.

Despite all the pandemonium under the lights in the final session, the visitors started the day on top with Mark Wood finally reaping the rewards of his hard work throughout the tour to pick up his career-best figures of 6 for 37. Australia resumed the day with a lead of 152 but were immediately put on the back foot as Wood nicked off Scott Boland and the first-innings centurion Travis Head before Steve Smith pulled one straight down the throat of fine-leg to leave the hosts reeling at 63 for six.

Alex Carey and Cameron Green added 49 runs to take Australia’s lead past 200 before Stuart Broad returned to remove the all-rounder on 23. Mark Wood then dismissed Mitchell Starc with a bouncer to seal his five-fer and eventually added a sixth to close out the Australian innings on 155.

Chasing 271, the visitors got off to an excellent start with the bat as Rory Burns and Zak Crawley put on England’s first half-century opening partnership of the series, capitalising on some wayward bowling from the hosts to score a flurry of boundaries.

However, England’s optimism in the run-chase was short-lived as Cameron Green got left-handers Rory Burns and Dawid Malan to chop onto their stumps before the all-rounder nicked off Zak Crawley with an excellent delivery that seamed away slightly after pitching.

The tourists hit the self-destruct button from that point onwards with the rest of the batters throwing away their wickets as England suffered one of the most embarrassing fourth-innings collapses in recent memory. Ben Stokes picked out Nathan Lyon at deep square leg with a mistimed pull shot before Joe Root fell to a ball that kept treacherously low from Scott Boland to start the procession.

It took Australia just 23 deliveries to wrap up the final five wickets as Sam Billings chipped one straight to mid-on while the Australian captain Pat Cummins picked up three of the last four dismissals to bundle England out for 124 and seal the Ashes victory.