Elgar leads from the front as South Africa level the series

Elgar leads from the front as South Africa level the series 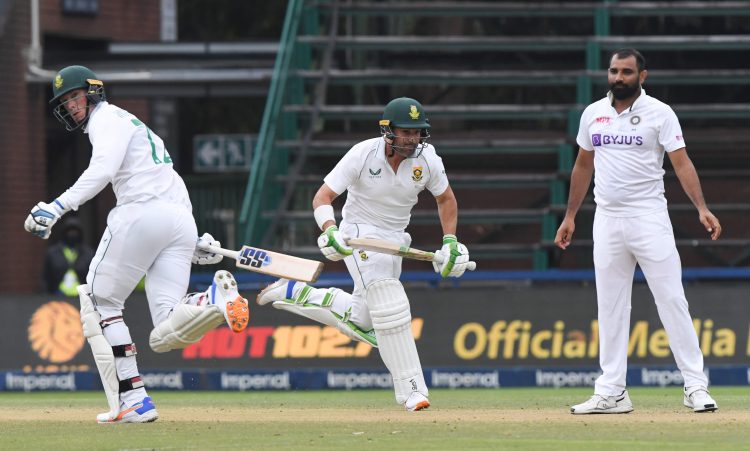 Dean Elgar composed a captain’s knock of 96 not out to lead South Africa to a famous 7-wicket win over India in the second Test in Johannesburg. Batting alongside Rassie van der Dussen and Temba Bavuma on a rain-hit day four, Elgar helped South Africa chase down 240 in the fourth innings, handing India their first Test defeat at the Wanderers and levelling the series at 1-1.

The opener braved a hostile spell of bowling from the Indian seam attack on a challenging surface, wearing multiple blows on his body and head to lead the Proteas to their highest fourth-innings run chase at home since 2002.

South Africa needed 122 runs overnight to win the Test but had to play the waiting game on day four due to passing showers and a wet outfield. The game eventually resumed under cloudy skies almost six hours after the scheduled start of play, with a minimum of 34 overs scheduled for the day.

The Proteas wasted no time in taking the attack to the Indian bowlers, scoring 57 runs in the first hour of play as India struggled to keep the ball dry due to the wet outfield. Although the Indian seamers got the occasional delivery to rear up from a length, Rassie van der Dussen played the role of the aggressor, scoring 14 runs off a Shami over while Elgar reached his fifty after a cover drive of an overpitched delivery from Ravichandran Ashwin.

With 65 runs still needed, India finally managed to get their first breakthrough of the day as Mohammad Shami nicked off Rassie van der Dussen to Cheteshwar Pujara at first slip, giving the Men in Blue a lifeline in the game. Unfortunately, KL Rahul’s side couldn’t make the most of this opportunity and squandered the chance to sustain the pressure when Shardul Thakur dropped Temba Bavuma for nought off his bowling, failing to hold onto the ball with his outstretched right arm during his follow-through.

Bavuma made full use of this reprieve, seeing through the run-chase alongside Dean Elgar, who got more fluent as the innings progressed. The opener creamed successive boundaries off Mohammad Shami before sealing South Africa’s fate in an 18-run over from Mohammad Siraj, which saw the pacer concede three fours and a bouncer that flew over Rishabh Pant’s head for extras.

Elgar eventually creamed the winning runs with a boundary off Ravichandran Ashwin, helping the Proteas level the series and setting up the decider in the third Test in Cape Town.