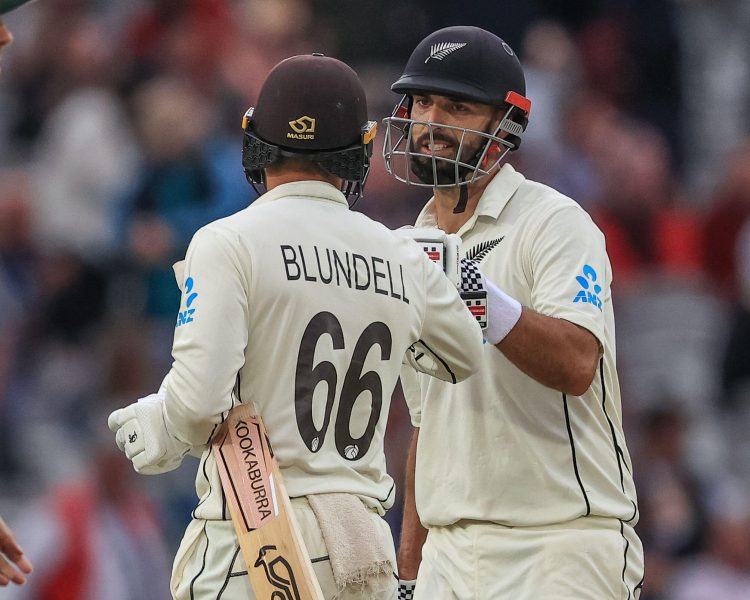 After being bowled out for 132 on day one, New Zealand staged an incredible comeback on day two of the first Test against England at Lord’s. The visitors dismissed England for just 141 in the morning to concede a nine-run lead before ending the day on 236 for four as Daryl Mitchell (97* off 188) and Tom Blundell (90* off 182) shared an unbroken 180-run stand to put New Zealand firmly in the ascendency.

Having reduced England to 116 for seven on day one, the Kiwi bowlers took care of business in the morning session as they picked up the final three wickets for just 25 runs. Tim Southee removed both overnight batters in quick succession, castling Stuart Broad with a full-pitched delivery before nicking off Ben Foakes to first slip to pick up his fourth wicket of the innings. England finished with a lead of just nine runs as Trent Boult removed concussion substitute Matt Parkinson to wrap up the innings on 142.

In reply, New Zealand’s top order suffered another poor start against the new ball with James Anderson nicking off opener Will Young in the third over and two more wickets falling before Lunch. The debutant Matty Potts removed Kane Williamson for the second time in the match before producing another gem to see the back of Tom Latham, with both batters edging behind cheaply.

The Kiwis slipped further in the second session when Stuart Broad strangled Devon Conway down the leg-side, leaving the visitors reeling at 56 for four with a lead of just 45. However, from that point onwards, New Zealand fought back as Tom Blundell and Daryl Mitchell showed plenty of patience and discipline to ensure that the rest of the day went wicketless.

The pair absorbed the pressure early on in their innings while the ball was still moving around before going after the English bowlers as Mitchell switched through the gears by taking Ben Stokes for a couple of fours. England’s seam attack lacked the sufficient pace and bounce to trouble the batters when the pitch flattened out, and the right-handers also received many pressure-releasing deliveries from the leg-spinner, Matt Parkinson, allowing them to score some free runs.

Both batters reached their half-century in a span of two overs after Tea and added 108 runs in the final session to swing the momentum in the first Test towards the tourists. The pair were briefly troubled by a spell of short-pitched bowling from Ben Stokes but managed to weather the storm and end the day within touching distance of a century each, giving the Kiwis a commanding 225-run lead at stumps.