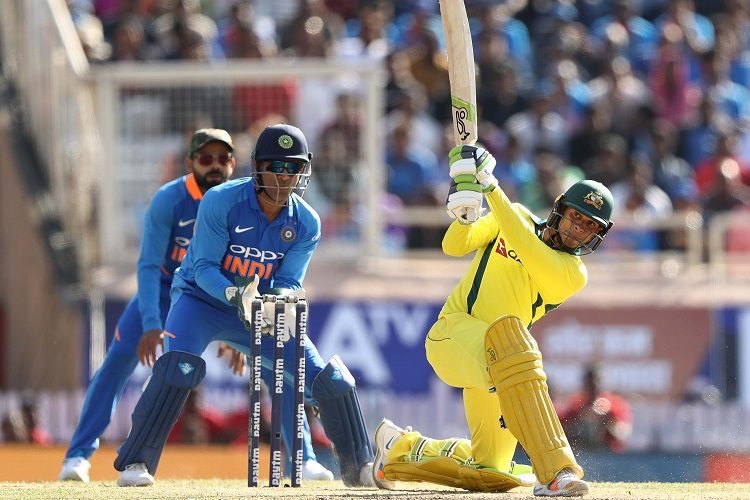 RANCHI, INDIA - MARCH 08: Usman Khawaja of Australia bats during game three of the One Day International series between India and Australia at JSCA International Stadium Complex on March 08, 2019 in Ranchi, India. (Photo by Robert Cianflone/Getty Images)

Australia pulled one back in the ODI series against India to stay alive in the series, at Ranchi; Afghanistan thrashed Ireland at Dehradun in the fourth ODI to take an unassailable 2-1 lead; England bowled out West Indies for 45 to clinch the T20I series; and at Wellington, the second day of the second Test between New Zealand and Bangladesh was washed out.

Virat Kohli’s 95-ball 123 at JSCA International Stadium Complex, Ranchi might have been an outstanding innings even by his lofty standards, but it was not good enough to rally India home. None of Kohli’s teammates reached even 35 as India were bowled out for 281 in pursuit of 315.

The Indian cricketers donned camouflage caps when they took field at Ranchi to honour the victims of the terrorist attack at Pulwama, Kashmir last month. They also donated their entire match fees to the National Defence Fund.

No Dhoni for rest of series

MS Dhoni has been rested for the last two ODIs of the series against Australia, at Delhi and Mohali. This was confirmed by MSK Prasad, Chairman of Selectors of the Indian side.

Life turned a full circle for the West Indians, who crashed to a humiliating defeat against England at Warner Park, Basseterre, St Kitts. Chasing 183, they were bowled out for a paltry 45 in 11.5 overs. Shimron Hetmyer and Carlos Brathwaite (10 each) were the only ones to put up any resistance.

Earlier, Joe Root (55 in 40 balls) held up one end after England were reduced to 32/4. Sam Billings took his time before exploding to finish on an unbeaten 87, off just 47 balls.

The momentum was with Ireland after they pulled off an excellent chase to level the series 1-1. They seemed to be capitalising on that, reducing Afghanistan to 81/6 at Rajiv Gandhi International Cricket Stadium, Dehradun.

Asghar Afghan (54) then took control, adding 50 with Mohammed Nabi (64). Then Rashid Khan took the attack to the Irish camp with an attacking 52. Afghanistan eventually reached 223.

No play again at Basin Reserve

Rain washed out the second day of the second Test between New Zealand and Bangladesh, at Basin Reserve, Wellington. If play resumes at any point, this will be Bangladesh’s best chance to avoid defeat in a Test match on New Zealand soil for the first time.