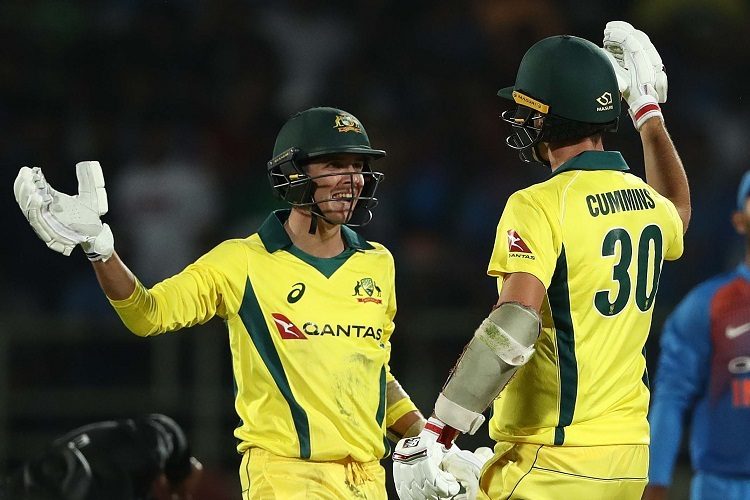 VISAKHAPATNAM, INDIA - FEBRUARY 24: Pat Cummins and Jhye Richardson of Australia celebrate after Australia defeated India during game one of the T20I Series between India and Australia at ACA-VDCA Stadium on February 24, 2019 in Visakhapatnam, India. (Photo by Robert Cianflone/Getty Images)

At Rajiv Gandhi International Cricket Stadium, Dehradun, Rashid Khan became the first bowler to take four wickets in four balls in a T20I (and the second in all international cricket) to help Afghanistan whitewash Ireland.

Despite losing Rohit Sharma early, India looked in charge in the first T20I against Australia, at Visakhapatnam. KL Rahul (50 in 36 balls) and Virat Kohli (24 in 17) put on 55 for the second wicket in 37 balls to set up what should have been the ideal launching pad.

Unfortunately, India kept losing wickets, and added only 46 in the last 10 overs to finish on 126/7. MS Dhoni (29*) was the only other batsman to cross 5. Nathan Coulter-Nile (3/26) did most of the damage. He found support at the other end too: every single bowler conceded less than 8 an over.

In response, Australia were reduced to 5/2 before Glenn Maxwell (56 in 43) and D'Arcy Short (37) added 84 for the third wicket. At that stage Australia were firmly on top, but the Indian spinners bowled a few tight overs, taking up wickets at the same time.

With 16 to defend off the last 2 overs, Jasprit Bumrah conceded only 2, picking up 2 wickets in the process. Unfortunately, Umesh Yadav conceded a boundary to each of Jhye Richardson and Pat Cummins, and with that, the match.

Rashid became the first to take four wickets in four balls in a T20I. In all international cricket, there is only one precedence: Lasith Malinga did the same against South Africa in the 2007 World Cup.

Ngidi in, Amla out

South Africa have been left Hashim Amla out of the squad for the ODIs against Sri Lanka. Notable inclusions are Lungi Ngidi, back after a knee injury, and Dale Steyn.

At Sharjah, Rilee Rossouw scored 44 in 32 balls and Umar Akmal 55 in 37 before Anwar Ali provided the final boost, smashing 4 sixes off the 6 balls he faced. Islamabad United finished on a reasonable 186/5.

It did not matter. Colin Ingram (127 not out in 59 balls) made the target look small. In the process he registered the highest score in PSL history, going past Sharjeel Khan's 117 set three seasons ago. Karachi Kings won with 8 balls to spare.