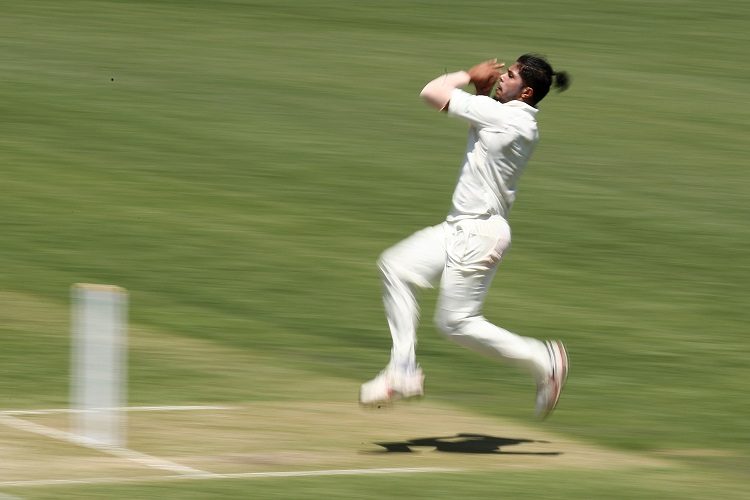 India looked in good shape at Ranchi on day two. The draft for 'The Hundred' took place in London. Mohammad Saifuddin is set to miss the T20I series against India.

India once again plied up huge runs against the visitors in the third Test at Ranchi. At first, Rohit Sharma and Ajinkya Rahane achieved their individual milestones- Rohit scored his maiden Test double and Rahane hit a Test ton at home after 2016. Ravindra Jadeja then walked in to work on the momentum and added another 51 runs. Umesh Yadav hit five maximums at the end to score a 10-ball 31. Once he was dismissed, Virat Kohli did not invest any more time in batting. India’s first innings was immediately declared on 497/9.

South Africa probably batted in the most difficult time of the day. As a result, they had to fight hard to survive in the last hour. They ended the day with 9/2 at stumps eventually. Mohammed Shami and Umesh Yadav took one wicket apiece.

Rashid Khan was the pick in the draft by Trent Rockets for the inaugural ‘The Hundred’ draft. The other overseas big names include Andre Russell and David Warner for Southern Brave,  Glenn Maxwell for London Spirit, and Sunil Narine for Oval Invincibles. Mitchell Starc and Steve Smith were picked for Welsh Fire and Imran Tahir was taken to Manchester Originals.

There were also English internationals and domestic players drafted into various teams as part of the total 96 drafted players. However, there was a limit of only three overseas players in each squad and as a result, some of the T20 greats like Chris Gayle and Lasith Malinga as well as youngsters like Babar Azam and Kagiso Rabada were not picked up by any of the eight teams. In total there were 475 unpicked players at the end of the draft.

Mohammad Saifuddin is still struggling with the back injury and set to miss the upcoming 3-match T20I series against India. The Bangladesh seam-bowling all-rounder was a part of the 15-member squad for the series but now the management is looking for a replacement.

Minhajul Abedin, the BCB chairman said that Saifuddin’s latest scan reports are not satisfactory. He added, ''We will talk with Julian [physio] tomorrow to take a final decision, but what I understand is that it won't be possible for him to take part in the T20 series.”

Papua New Guinea continued their good form and registered their second win in as many matches in Group A. Their total of 197/7 in 20 overs were too much for Namibia who were all out for just 116 in the first ball of the 18th over. PNG opener Tony Ura scored 71 off 42 balls to give them a good launching pad for later part of the innings. In the Namibia innings, Assad Vala of PNG took 3/19 with five more bowlers picking up one wicket each.

After upsetting Scotland in their first match in Group A, Singapore maintained their 100% record with a tight win against Bermuda. Batting first, Bermuda posted 149/7, thanks to an unbeaten fifty from Janeiro Tucker. For Singapore Janak Prakash took 3/44. Singapore were in a spot of bother in their chase with the score on 41/4 in the 9th over. However Navin Param, playing just his 4th T20I, played a brilliant counter attacking innings and added 79 runs with Manpreet Singh in the fifth wicket. Despite Singh’s departure Param kept playing his shots and finished the match in the 20th over with an unbeaten 72 off 41 balls.

In Group B, Canada won their first match of the tournament against Jersey by 53 runs. Nitish Kumar’s 36-ball 83 was the mainstay of the innings which included four fours and six sixes. The captain Navneet Dhaliwal contributed 36 as Canada posted 176/5. Jersey were all out for just 123 in 17 overs as both the opening bowlers from Canada, Jeremy Gordon and Dillon Heyliger got three wickets each.

Oman are now leading the Group B table with an easy win over Hong Kong. Three wickets from Ameer Kaleem and Khawar Ali helped them to restrict Hong Kong for just 102. Then Aqib Ilyas with 37 and the captain Zeeshan Maqsood with 24 finished the match with an unbeaten 60-run partnership.