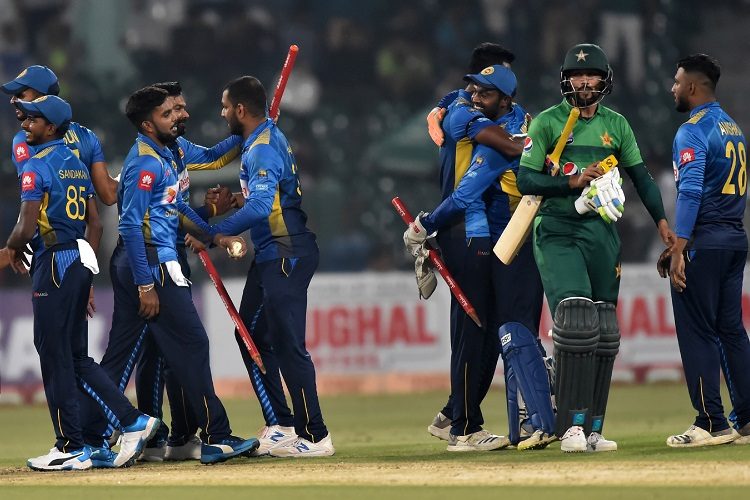 Sri Lanka secured a 3-0 series victory in Pakistan after beating the hosts by 13 runs in the final T20I. Elsewhere, Virat Kohli wants away Tests to be weighted more in World Test Championship, and Jimmy Anderson makes a left-field decision.

Sri Lanka secured a remarkable 3-0 series win against Pakistan in Lahore on Wednesday, October 9, after securing a 13-run win in the final T20I.

Oshada Fernando was the star for the visitors, his 48-ball 78* reviving a struggling innings and taking the visitors’ total to 147/7. Pakistan were slow in their chase though, with both Babar Azam (27 off 32) and Haris Sohail (52 off 50) kept in check by the Sri Lankan bowlers.

Wanindu Hasaranga once again had an impressive match, returning 3/21, and his late wickets ensured Pakistan were restricted to 134/6 in their 20 overs. It meant the visitors, a side filled with fringe players, had a story to tell once they went back home.

Anderson to train with Manchester City to aid recovery

England paceman Jimmy Anderson will train at the home of the Premier League champions Manchester City to aid his recovery from a nagging calf problem.

The injury restricted England’s premium pacer to just four overs in the Ashes series over the last couple of months, and Anderson has now reached an agreement with those at City to use the facilities at The Etihad Stadium. He will be accompanied by Rob Ahmun, England’s strength and conditioning coach.

“It has been absolutely devastating to miss the Ashes series but I have not thought for one second about retiring," Anderson said. "In fact, I'm going to look into how Ryan Giggs was able to play football at the highest level until he was 40. That's what I'd like to do.”

India captain Virat Kohli has an idea for the ICC World Test Championship – double the points for overseas Test wins. Kohli was speaking on the eve of India’s second Test against South Africa in Pune.

Kohli said the Championship had a positive effect on teams going for wins, but hoped for some tweaks when the next edition roles out in 2021. "The importance of every game has become that much more," Kohli said. "In situations that, in a three-match series, you probably would have played out a draw, teams are going to go for wins and get those extra points, so I think it's great for Test cricket.

“If you'd have asked me to make the points table, I would give double the points for an away Test win. That is something that I would have definitely liked to see. Maybe after the first edition.”

It helped Australia hunt down a target of 196 in just 26.5 overs, with Rachael Haynes scoring a 74-ball 63 in support. There was also captain Meg Lanning chipping in at the end with a 11-ball 20* to guide Australia to an easy win.

Earlier, Chamari Athapaththu, the Sri Lanka captain, once again propped up Sri Lanka’s innings with a 124-ball 103. Unfortunately, as has been the case with Sri Lanka, she was offered very little support, with Harshitha Madavi’s 24 the highest score among the rest of the team.

Australia have now won 18 matches in a row in ODIs – a world record – and Lanning said it was a “very special” achievement.