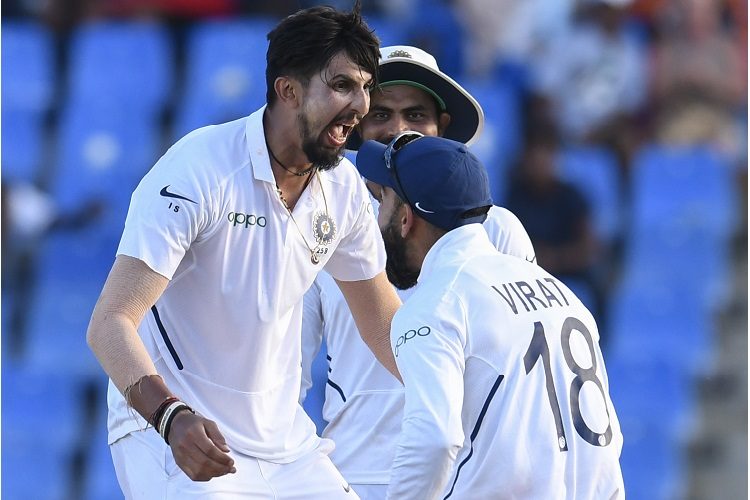 The first day of the historic pink-ball Test in India saw the hosts bundle out Bangladesh for a measly total, before half-centuries from their captain Virat Kohli and Cheteshwar Pujara helped them end the day with a decent lead. Elsewhere, Australia are in control against Pakistan after the David Warner show, and India’s T20Is against West Indies have a venue swap.

India and Bangladesh played their first day-night Test on Friday, November 22, but it was business as usual, with Bangladesh being skittled out for 106, before the Indians piled on the runs.

By stumps, India were 174/3, a lead of 68, after Cheteshwar Pujara and Virat Kohli scored half-centuries, following the early dismissal of the openers.

But the day was all about Ishant Sharma, who got his first five-for at home in Tests in 12 years, returning a fine 5/22. On an eventful day, Bangladesh also had to name two concussion subs, with both Liton Das and Nayeem Hasan taking hits from a blistering Mohammed Shami spell.

David Warner hammered an unbeaten 151*, riding his luck at times, as Australia posted 312/1 in reply to Pakistan’s 240 on the second day of the first Test in Brisbane.

Warner and Joe Burns put up 222 runs for the opening wicket, before the latter was dismissed three runs short of what would have been his fifth Test century.

But Marnus Labuschagne came in and partnered Warner, as Australia ended the day with a lead of 72. Yasir Shah was the only wicket-taker for Pakistan.

England reduced New Zealand to 144/4 by stumps on the second day of the first Test after posting 353 in their first innings at the Bay Oval.

New Zealand did well to restrict England to 353, given Ben Stokes' 91 had helped them reach 277/4 at one stage. But the home team's batsmen weren’t able to put on strong partnerships.

They got off to a poor start, losing Tom Latham for just 8. Jeet Raval, the other opener, then shared a 54-run stand with skipper Kane Williamson, with the latter doing the bulk of the scoring.

Raval and Ross Taylor were both dismissed quite quickly thereafter, but Henry Nicholls provided support, brushing off a hit on the head off a bouncer.

The first match of the T20Is against West Indies will now be played in Hyderabad, with the Mumbai police unable to provide security cover on that date.

"The BCCI has informed us that the December 6 T20I will now be played in Hyderabad. The final match will be played in Mumbai," HCA secretary R Vijayanand told Times of India.

Mumbai Cricket Association were optimistic that all issues could be sorted out in time for the T20Is, but the BCCI decided not to take any chance, and made the shift.\