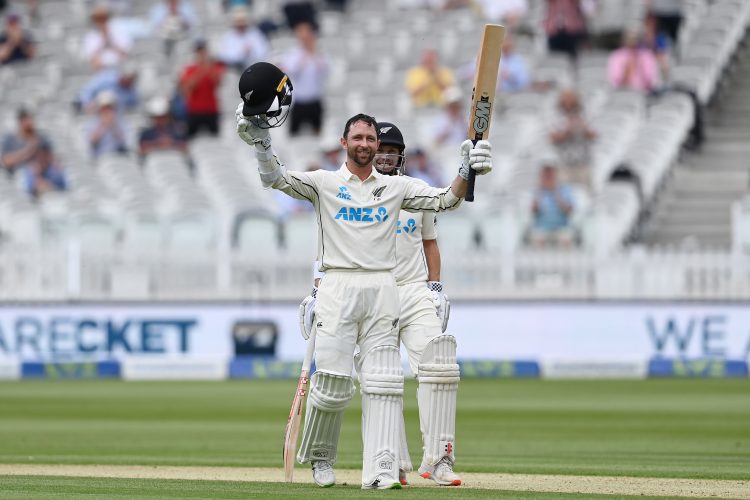 New Zealand enjoyed the perfect start to their two-match Test series against England as they ended an attritional first day’s play at 246-3. The day belonged to Kiwi debutant Devon Conway who took to test cricket like a duck to water and scored his maiden century in the longest format on debut. Conway looked incredibly measured in his approach and exploited the brilliant batting conditions to finish with 136* from 240 balls, the highest score by a debutant at Lord’s.

On a sunny summer’s day at Lord’s, Kane Williamson won the toss and chose to make the most of the flat batting track on day one of the Test. Debutant Conway put together a solid opening partnership alongside Tom Latham which saw them negotiate the new ball and that tricky opening hour.

However, despite getting a start, Latham departed after chopping the ball onto his stumps and the world number one batsman Kane Williamson suffered the same fate in the first over after the lunch break to leave the Kiwis at 86-2.

The England bowlers found considerable movement in the second session of the day but Conway continued to bat with the perfect balance of aggression mixed with a solid defence. Conway did well to leave deliveries that were pitched on a good length but feasted on any delivery that was short or full on his pads. He eventually brought up his century in style with a nonchalant flick behind square to become the 12th Kiwi batsman to reach three figures on debut.

South African born Conway shifted to New Zealand in 2017 with the hope of restarting his cricketing career. After scoring a truckload of runs at the domestic level, Conway was finally eligible to play for the Kiwis in September 2020 and has set the international arena ablaze with his performances since then. The left-hander averages 59 in T20I’s and 75 in ODI’s in his short international career so far and has now put the icing on the cake with his wonderful debut century at the home of cricket.

New Zealand ended the day with a 136-run partnership between Conway and Henry Nicholls and are in a commanding position in this match with plenty of batting yet to come. The Black Caps effort on day one validated their status as one of the top two Test nations in the world at the moment and the form of Conway will certainly please the Kiwis as they build towards the all-important ICC world Test Championship Final against India.