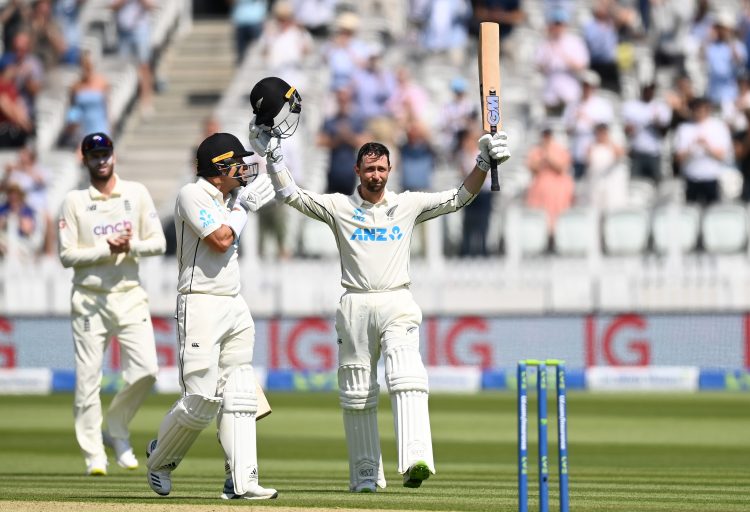 Devon Conway continued to create history at the home of cricket and after getting his name on the Lord’s honour board on day 1, Conway went on to score an impressive 200 for the Kiwis on day 2. Conway’s double century alongside contributions from Henry Nicholls and Neil Wagner pushed New Zealand to a total of 378 but England were able to fight back in the post-tea session and ended the day at 111-2 with Joe Root and Rory Burns at the crease.

The runs flowed in the morning session for New Zealand with Conway and Nicholls hitting a flurry of boundaries against the second new ball. Nicholls was eventually dismissed after mistiming his hook shot for 61 to end a fine partnership of 174 between the pair.

The dismissal of Nicholls opened the floodgates for England with Wood picking up BJ Watling with a wonderful delivery that caught the outside edge before all-rounders Colin De Grandhomme and Mitchell Santner were both dismissed without troubling the scorers.

Despite the wickets tumbling around him, Conway continued to time the ball with supreme elegance and pushed New Zealand towards a 350+ first innings score. The opener received support from an unlikely source, with number 11 Neil Wagner playing a superb little cameo of 25 runs from 21 balls which included some textbook cover drives of Stuart Broad.

Conway eventually brought up his double century with a top edge that flew over the ropes to become only the 7th man in the history of the game to score a double hundred on debut. The opener batted throughout the innings and was eventually the last man to be dismissed with the Kiwis putting up an impressive 378 in the first innings of the series.

After spending nearly 123 overs in the field, England had a torrid start with the bat with both Zak Crawly and Dom Sibley departing for single digits.

Eventually, Joe Root and Rory Burns were able to steady the ship and negate the early seam movement to bring England back into the contest. After a disappointing tour of the subcontinent earlier in the year, Burns regained some form on home soil to score a well-deserved half-century. The left-hander shared a 93-run partnership with his captain Joe Root and ensured the final session of the day went wicketless, with England trailing the Kiwis by 267 runs at the close of play. The conditions have been brilliant for batting on the first two days of the Test Match and England will be hoping that the sun continues to shine over North London as they look to reduce the first innings deficit and get back into this Test Match