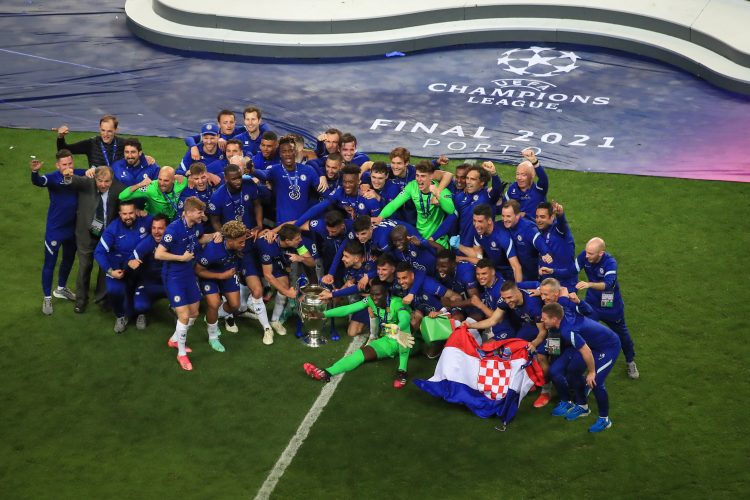 Chelsea have been crowned as the kings of Europe following their excellent 1-0 victory over Manchester City in the final of the UEFA Champions League in Porto. Kai Havertz’s first-half strike was enough to separate the two sides and give the Blues their first UCL title since their victory over Bayern Munich in the 2012 final.

Chelsea were deserved winners on the night, defending excellently throughout the 90 minutes and snatching the winner just before half-time to beat Pep Guardiola’s Manchester City for the third time in the space of two months.

Despite the 1-0 scoreline, it was an action-packed match played at full speed with both sides pressing aggressively. Raheem Sterling had the first real opportunity of the match after an excellent ball from Ederson over the top but Reece James was quick to snuff out the danger. At the other end, Timo Werner similarly failed to convert his chances and aimed his shot straight at the City goalkeeper from close range.

Despite these missed opportunities, Chelsea continued to find joy down City’s right-hand side through Ben Chilwell and eventually opened the scoring via Kai Havertz.

The Blues were able to bypass City’s press thanks to some clever interplay between Edouard Mendy and Ben Chilwell before the wing-back passed the ball to Mason Mount who found himself in a pocket of space with multiple runners in front of him. Despite his comical finishing, Werner’s movement was a constant threat to the City backline and on this occasion, his darting run down the left-flank dragged Ruben Dias along with him which opened up a wonderful open passing lane for Mount to play in Kai Havertz. Mount played a perfectly weighted ball to release the German who rounded the keeper and passed the ball in the net to put Chelsea in front.

In the second half, the Blues defended resolutely, with N’Golo Kante covering nearly every blade of grass on the field while the likes of Reece James, Andreas Christensen, and Cesar Azpilicueta made crucial interventions to deny City any opportunities. Ultimately the Premier League Champions had no answer and couldn’t break down Chelsea’s back five, creating very few chances of note in their quest for an equalising goal.

Unfortunately for Pep Guardiola, he was once again his own worst enemy and was once again guilty of overthinking matters during the biggest games. Guardiola’s decision to not play a holding midfielder made City vulnerable in transition while the creative players – Foden, De Bruyne, Bernardo Silva – were completely anonymous on the night. As City froze in the headlights, the Chelsea players rose to the occasion and produced one of their best performances of the season and were deservedly crowned as the kings of Europe.