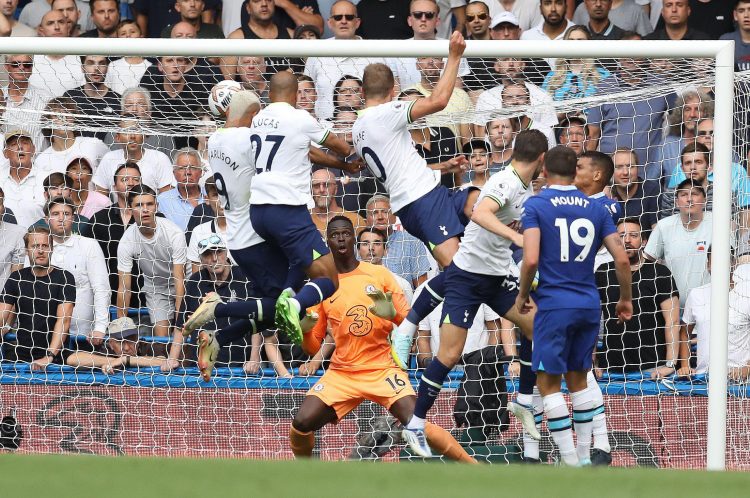 It was a Premier League classic between Chelsea and Tottenham Hotspur at Stamford Bridge on Sunday as the two London rivals shared the spoils in a feisty 2-2 draw. The Blues took the lead on two separate occasions through defenders Kalidou Koulibaly and Reece James, only for Tottenham to equalise through Pierre-Emile Hojbjerg and Harry Kane, with the striker heading home in the 96th minute to rescue a point for the visitors.

The tensions of the hotly contested derby boiled over in the London sunshine after the full-time whistle, with both Antonio Cone and Tomas Tuchel showed straight red cards for their involvements in the post-match altercation. The two managers clashed in the aftermath of Hojbjerg’s equaliser before going face to face again following Kane’s last-gasp header, causing them both to be sent off.

The frustration for Chelsea and Tomas Tuchel likely originated from the fact that they let a victory slip through their fingers at the death despite dominating the majority of the 90 minutes. The Blues neutralized Tottenham’s front three of Kane, Son, and Dejan Kulusevski throughout the first half and had plenty of chances to put the game to bed.

Kai Havertz received the first major scoring opportunity of the game, the German’s shot deflected wide of the post by Hugo Lloris after some neat inter-play from N’Golo Kante and Raheem Sterling. The Blues opened the scoring from the resulting corner, with their two summer signings combining from the set piece. Centre-back Kalidou Koulibaly perfectly met Marc Cucurella’s delivery at the edge of the area, volleying home through a crowd to give Chelsea the early advantage.

Chelsea had numerous opportunities to double their lead, only for Koulibaly, Mason Mount and Raheem Sterling to blaze their efforts over the bar. Tottenham wasted a chance of their own to find the back of the net, with Kane scuffing his 1v1 effort vs Mendy, but Antonio Conte’s found the equaliser when Hojbjerg’s long-range strike sneaked past the goalkeeper into the net.

Chelsea should have re-taken the lead when Reece James expertly set up Kai Havertz with a delightful curled cross into the area, but the Blues eventually did restore their advantage when Sterling released the right-back, who rifled the ball into the net.

Much to the delight of Tomas Tuchel, Chelsea seemed to have wrapped up the three points heading into extra time. However, Tottenham displayed their newfound mettle under Antonio Conte to level the scores for the second time. After Cristian Romero avoided any trouble for pulling Marc Cucurella’s hair in the penalty area, Harry Kane redirected Ivan Perisic’s in-swinging cross in the final minute of stoppage time to cap off a fiery London derby with one final twist.