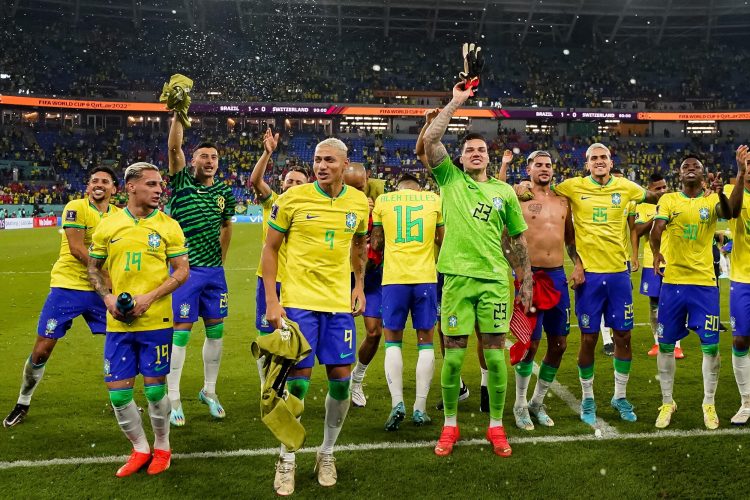 Brazil continued their winning start to the 2022 FIFA World Cup in Qatar with a 1-0 victory over Switzerland at Stadium 974 on Monday. It was far from a vintage performance from the five-time winners in their second group outing, but Casemiro’s 83rd-minute strike helped the South American giants edge past the Swiss and confirm their spot in the round of 16 of the World Cup.

Brazil made two forced changes to their XI for this fixture, with the injured duo of Neymar and Danilo replaced by Fred and Real Madrid defender Eder Militao. Despite the rapturous support from the Brazil fans in Doha, the Selecao laboured in attack in the first period in the absence of their star forward. The introduction of Fred into midfield allowed Tite’s side to remain solid defensively, but the three forwards often found themselves isolated from the rest of the action.

Brazil’s best moment came in the 26th minute when Raphinha cut inside on his left foot before delivering a cross for the onrushing Vinicius Jr at the back post, whose shot was well-saved by goalkeeper Yann Sommer. Neither side managed any other significant opportunities before the half-time whistle, and Switzerland’s best moment of the game shortly after the break as Silvan Widmer’s cross into the six-yard box had to be dealt with by Alex Sandro.

Switzerland also looked more vulnerable in defence in the second period, and Richarlison was inches away from opening the scoring as he looked to get on the end of Vinicius Jr’s cross. Brazil eventually did carve through the Swiss resistance in the 64th minute, when Vinicius Jr curled the ball into the back of the net on a breakaway. However, the goal was later disallowed following a VAR check due to an offside in the build-up involving Richarlison.

Desperate to find an opening, Tite brought on Gabriel Jesus, Antony, Bruno Guimares, and Rodrygo, and the changes made the difference, with the Real Madrid youngster setting up the winning goal in the 83rd minute. Rodrygo released Casemiro with a deft pass, who laced the ball into the top corner to break the deadlock. Brazil should have added a second in the closing stages, but Rodrygo and Vinicius Jr were unable to find the final action in front of the goal.

This result takes the Selecao to the top of Group G and puts them in pole position to qualify as winners. Switzerland remain in contention to reach the last sixteen for the third World Cup in a row but would need to beat Serbia on the final matchday to guarantee their progress into the next round.