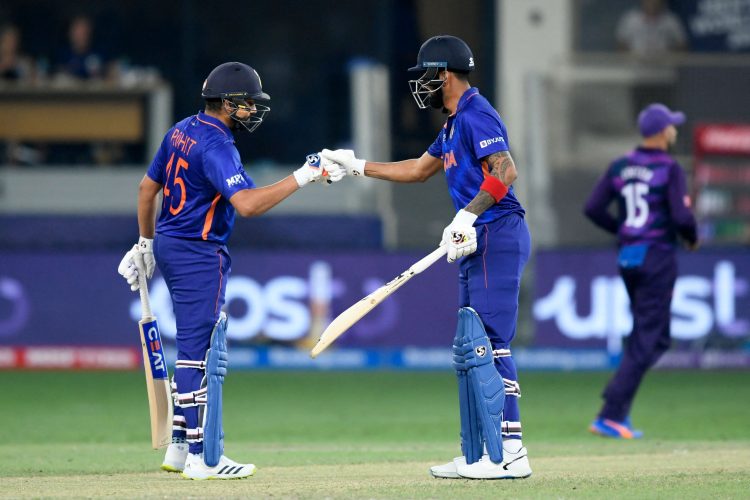 It was another ruthless performance from India in the T20 World Cup as Virat Kohli’s side followed up their win against Afghanistan with a comprehensive 8-wicket trouncing over Scotland. Mohammed Shami and Ravindra Jadeja picked up six wickets between them to reduce Scotland to 85-all out before KL Rahul blazed away to an 18-ball half-century to help India chase down the total in 6.3 overs and lift their net run rate above rivals Afghanistan and New Zealand.

While this victory keeps India’s hopes alive in the tournament, the fate of the Men in Blue still doesn’t rest in their own hands, with Virat Kohli’s side needing Afghanistan to beat New Zealand on Sunday to progress to the final four.

After birthday boy Virat Kohli won his first toss of the tournament and opted to bowl, Scotland showed some initial fight with opener George Munsey playing a couple of delightful shots in the powerplay. Munsey flicked the ball off his pads into the stands in Jasprit Bumrah’s opening over before hitting a hat-trick of boundaries against Ravichandran Ashwin – including two reverse sweeps – to give Scotland some early joy.

Unfortunately for Scotland, the class of the Indians and the mismatch of skills between the two sides eventually shone through as Bumrah opened the floodgates with a slower ball to dismiss Coetzer before Shami ended Munsey’s entertaining stay at the crease. The innings started to unravel sooner than anticipated, with Ravindra Jadeja landing a double blow in the seventh over to reduce Scotland to 29 for four.

The left-arm spinner was accurate as ever while getting the odd ball to turn, finishing the innings with his career-best T20I figures of 3 for 15. Jadeja was well complemented by Mohammed Shami, who bowled two searing yorkers at the death in a triple wicket over for the Indians which eventually restricted Scotland to 85.

In the run-chase, India needed to reach the target in 7.1 overs to overtake Afghanistan on net run rate, and the openers – Rohit Sharma and KL Rahul – carried on from where they left off in Abu Dhabi and displayed some sensational ball-striking. KL Rahul destroyed the Scottish bowlers with a vengeance and smashed nine boundaries to score the fastest half-century of the tournament so far – of only 18 balls – and the second-fastest by an Indian in T20I’s. He was well accompanied by Rohit Sharma (30 off 16), who punished anything full from the bowlers as India chased down the target in lightning quick time with 81 balls to spare.