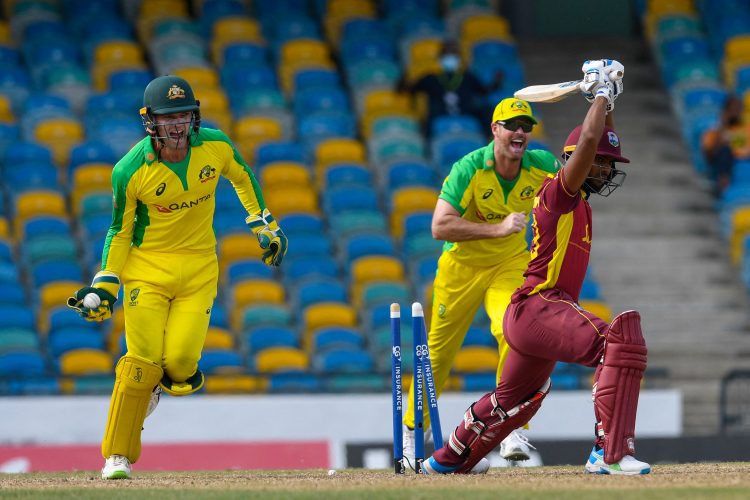 Following their 4-1 defeat in the T20s, Australia bounced back emphatically to end their tour of the West Indies with a victory in the 3-match ODI series. On an incredibly tricky pitch to bat on at Barbados, the Australian bowlers once again came to the party as they bowled out the West Indies for a below-par 152 before comfortably chasing the target down in 30 overs thanks to a half-century from Matthew Wade.

Opting to bat first, the West Indies were handed a body blow early on when opener Evin Lewis was forced to leave the pitch according to concussion protocols after top-edging a delivery onto his helmet. His replacement – Shimron Hetmyer – didn’t last too long in the middle either, dragging a delivery from Josh Hazlewood onto his stumps.

The surface offered plenty of assistance to the spinners with its two-paced nature, and Australia introduced spin in the 6th over itself. Ashton Agar was recalled into the XI for this fixture, and the left-arm spinner wasted no time to get into the contest, removing opener Shai Hope and Darren Bravo in quick succession. Part-time off-spinner Ashton Turner also got into the action by castling Nicholas Pooran with a delivery that didn’t spin, while Mitchell Starc got the crucial wicket of Kieron Pollard off the first ball of his second spell.

Leg-spinner Adam Zampa has been one of the key-men for Australia on this tour, and after conceding only six runs in his first 4 overs, Zampa left the West Indies reeling at 75-6 when he cleaned up Jason Holder.

After being cleared to bat, Evin Lewis returned to the crease and temporarily rescued the hosts, stitching a 44-run partnership with Alzarri Joseph and reaching his half-century to take the West Indies past 150. However, the fightback was short-lived as Josh Hazlewood and Mitchell Starc ran through the tail comfortably with the left-armer continuing to impress in this series and finishing with 11 wickets across the 3 matches.

Australia’s 153-run chase got off to a tricky start with both openers returning to the pavilion with only 27 runs on the board. West Indies introduced spin in the 3rd over of the innings and looked to attack early on, but Mitchell Marsh relieved some of the pressure with a quickfire 29 off 21 balls that included three 6s and a four. Marsh’s onslaught was eventually cut short by Sheldon Cottrell, but Matthew Wade (51*) guided the visitor’s home with key partnerships alongside stand-in captain Alex Carey (35) and Ashton Agar (19*) to hand Australia a 2-1 series victory.