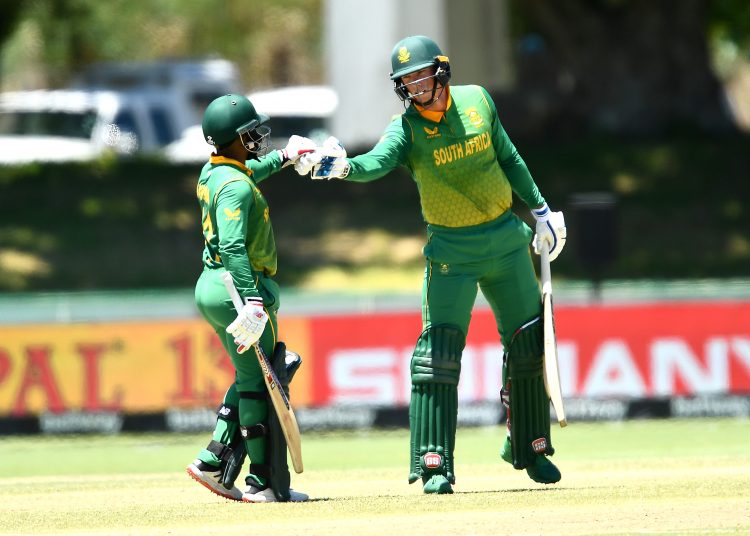 Twin tons from Temba Bavuma and Rassie van der Dussen gave South Africa a comfortable 31-run win over India in the first ODI in Paarl on Wednesday. The two middle-order batters put on a brilliant 204-run partnership, rescuing the hosts from 68 for three and taking them to a formidable total of 296 on a Boland Park pitch that offered plenty of assistance to the spinners.

Half-centuries from Shikhar Dhawan and Virat Kohli gave India a strong foundation in the run-chase, but the visitors continued to lose wickets throughout the middle overs to give the Proteas a straightforward victory.

Having won the toss and opted to bat first, South Africa got off to a shaky start to their innings, with opener Janeman Malan edging behind off Jasprit Bumrah and Ravichandran Ashwin castling Quinton de Kock in his first ODI outing since 2017. The hosts slipped further when the debutant Venkatesh Iyer ran out Aiden Markram for four, but Temba Bavuma and Rassie van der Dussen combined to put South Africa back in the ascendency as they added 204 runs in just 183 balls for the fourth wicket.

Although Van der Dussen was gifted an early reprieve by Rishabh Pant off a carrom ball from Ashwin, the right-hander put the pressure back on India with his aggressive shot selection, using the sweep and reverse sweep to good effect against the spinners.

Van der Dussen was given good company by his captain Temba Bavuma, who played the anchor’s role to perfection and eventually brought up his century in the 45th over off 133 balls. Van der Dussen got to the three-figure mark himself three overs later off 83 deliveries and finished with a career-best 129* as South Africa crunched 51 runs in the final five overs to finish with 296 at the break.

In response, India lost their captain KL Rahul early in the run-chase, with the opener edging behind to part-time spinner Aiden Markram. However, Shikhar Dhawan and Virat Kohli combined to get the Men in Blue back on track, with the left-hander bringing up his half-century in 51 deliveries and taking the visitors to 104 for one in 20 overs.

Kohli also brought up his fifth ODI half-century in his last six innings in 60 balls, but neither batter could capitalize on their start to take the team home. Shikhar Dhawan was dismissed by a delivery that spun back sharply from Keshav Maharaj on 79 while Kohli departed three overs later, top-edging one to Temba Bavuma inside the circle. The Proteas dominated from that point onwards, as India lost five wickets for fifty runs before Shardul Thakur scored a consolation half-century to limit the margin of defeat to just 31.