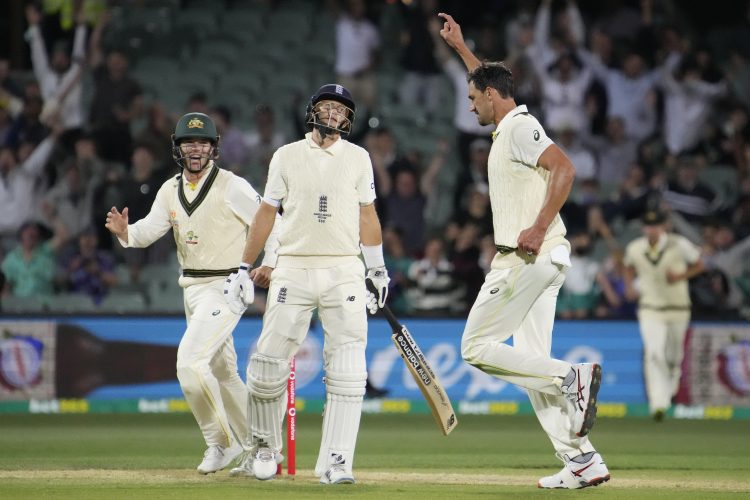 Australia closed in on victory on day four of the second Test in Adelaide, picking up four wickets before the close of play after setting England a target of 468 in the fourth innings. Mitchell Starc landed the killer blow in the final over of the day, nicking off Joe Root on 24 to end any English hopes of salvaging a draw.

Australia resumed the day 282 runs in front and stretched that lead to 467 before declaring for the second time in the match. However, it wasn’t plain sailing for the hosts at the start of play as England enjoyed a fruitful afternoon, picking up three wickets for just ten runs to start the day. James Anderson removed the night-watchman Michael Neser with a superb delivery that swung in late and knocked over middle-stump before Stuart Broad sent back Marcus Harris thanks to an excellent diving catch from Jos Buttler.

Broad should have had Steve Smith off his very next delivery, only for Buttler to drop his third catch of the Test behind the stumps. Smith was saved by umpire’s call off his second delivery as well but couldn’t make his luck count as Buttler atoned for his earlier error, taking a fine one-handed diving catch to remove the Australian captain on six.

Things slowly started to unravel for the visitors after the opening hour as Marnus Labuschagne and Travis Head launched a counter-attack. With Joe Root off the field, England turned to Ollie Robinson for some part-time spin, with the fast-bowler sending down three overs of off-breaks to aid the over-rate.

Labuschagne and Head shared a brisk 89-run partnership, and both batters reached their half-century before perishing in the deep. Australia limped to 230 for nine before the declaration eventually came just as twilight approached.

England had 130-odd overs to survive for a draw, but the visitors suffered an immediate setback as Haseeb Hameed became the 49th English batter to fall for a duck in 2021, edging behind to an excellent delivery from Jhye Richardson that reared up off a good length. Dawid Malan creamed his first delivery to the boundary with an excellent cover drive and shared a promising partnership with Rory Burns that lasted nearly 20 overs. However, Malan was denied a third consecutive half-century by a Michael Neser inswinger before Richardson ended Rory Burns’ resistance on 34.

England were poised to end the day with seven wickets in the bank, but Mitchell Starc landed the knockout punch in the last over before stumps. Having been painfully struck on the box in Starc’s previous over, Root edged to Steve Smith at first slip to leave England on the brink of defeat in the second Test.