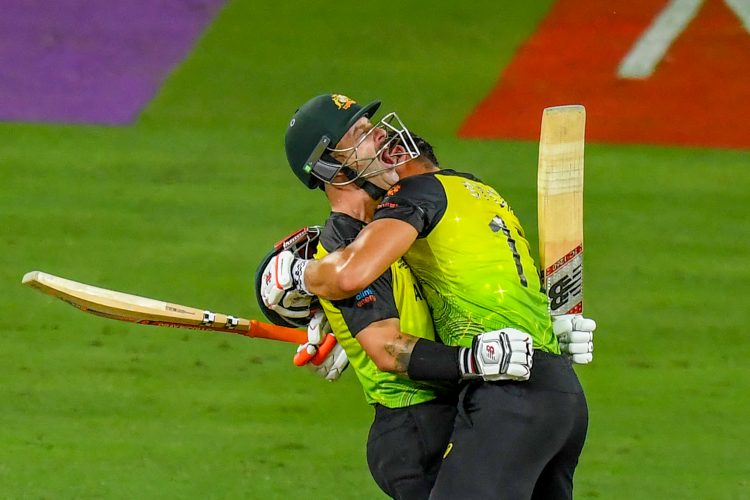 Another T20 World Cup semi-final and another thrilling run-chase as Australia knocked out the favourites Pakistan with a sensational victory in Dubai by five wickets. Following in the footsteps of Jimmy Neesham and Daryl Mitchell from the night before, Matthew Wade stole the show for Australia at the death, launching three consecutive sixes off Shaheen Afridi in the penultimate over to seal the win. Chasing 177, David Warner led the charge for Australia with his 49 off 30 before Wade and Stoinis shared a scintillating 81-run partnership off 40 balls to send Australia to their first T20 World Cup Final since 2010.

Babar Azam’s side entered the semi-final as the only unbeaten team left in the competition and got off to a promising start after being put in to bat by Aaron Finch. Pakistan have lost only two powerplay wickets throughout the tournament, and the openers – Babar Azam and Mohammad Rizwan – gave the team another promising start, putting on 47 runs in the first six. However, the pair managed only one boundary in the four overs after the powerplay, and Babar eventually succumbed to the pressure, slogging Adam Zampa straight to long-on.

After scoring only 71 runs in the first 10 overs, Pakistan rallied in the back half of the innings thanks to two sensational half-centuries from Rizwan and Fakhar Zaman. Rizwan took a blow to the helmet from a mean Mitchell Starc bouncer but responded with two sixes off Josh Hazlewood while bringing up his third 50 of the World Cup. Zaman, meanwhile, smashed two sixes off the final three balls of the innings from Starc to reach his half-century off 31 deliveries, and help Pakistan put on the highest total of the tournament in Dubai.

In the run-chase, Australia were rocked early on by the swing and the speed of Shaheen Afridi, who trapped Aaron Finch on his pads for a golden duck before nearly removing Mitchell Marsh of the very next delivery with a yorker on the toes. David Warner launched the counter-attack, making the most of his matchup against Imad Wasim while Mitchell Marsh took on the pacers Haris Rauf and Hasan Ali. The pair put on 51 runs in the powerplay, but Australia lost quick wickets through the middle overs with Marsh, Smith and Maxwell all caught on the boundary against Shadab Khan.

The leg-spinner even removed David Warner one run short of his half-century as Australia slumped to 96 for five in 12.2 overs, bringing Marcus Stoinis and Mattew Wade to the crease. The pair had finished a game at the death for Australia earlier in the tournament and used all that experience to take the game deep. The match hung in the balance with 62 needed off the last five, but a couple of big overs off Hasan Ali and Haris Rauf put the Aussies in the driving seat.

Hasan Ali’s miserable night continued when he dropped Matthew Wade in the penultimate over with 20 needed off 10. Wade made Pakistan pay for that mistake, ramping two full deliveries for six to go along with a slog over the mid-wicket boundary off Shaheen Afridi to send Australia into Sunday’s final against New Zealand.