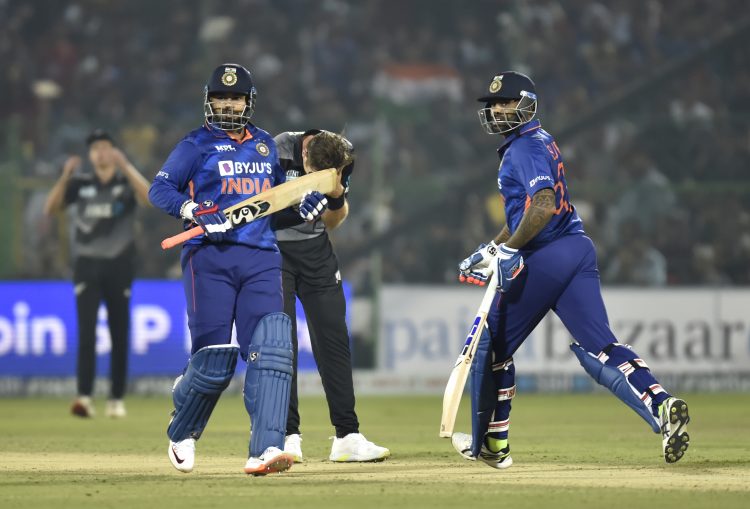 Rahul Dravid starts his tenure as head coach with a win as India narrowly beat the T20 World Cup finalists New Zealand by five wickets in the opening encounter of the 3-match T20 series in Jaipur. Powered by Suryakumar Yadav’s half-century, India were cruising to victory with 23 runs needed off the final 24 balls. However, three tight overs from the Kiwis added tension to the run-chase to leave India needing 10 off Daryl Mitchell’s final over. The Men in Blue eventually crossed over the finish line with debutant Venkatesh Iyer creaming his first ball to the boundary before Rishabh Pant hit the winning runs with a lofted stroke over mid-off.

Having won the toss, India got off to the perfect start with the ball as Bhuvneshwar Kumar uprooted Daryl Mitchell’s middle stump with an-inswinger. After a slow start, Kane Williamson’s replacement at number three – Mark Chapman – led the New Zealand revival alongside Martin Guptill, as the pair shared a 109-run partnership off 77 deliveries.

New Zealand threatened to put on a 180-run total with Chapman and Guptill at the crease, but R Ashwin pulled things back wonderfully for India with a double strike in the 14th over. Ashwin beat the left-hander Chapman in the air with a flighted delivery that crashed into the off-stump before pinning Glenn Phillips on his pads with a carrom ball.

Martin Guptill took the Blackcaps past 150 with a couple of swings to the fence, but his dismissal in the 18th over swung the momentum away from the Kiwis, with India conceding only 14 runs off the final 16 deliveries.

Chasing 165, India got off to a flier on the back of Rohit Sharma’s exquisite stroke-play, taking 50 runs off the first five overs. The Indian captain began the proceedings with a trio of boundaries off Tim Southee and continued the onslaught with a couple of trademark shots against Trent Boult.

KL Rahul holed out to Mark Chapman in the deep in the final over of the powerplay, but Suryakumar Yadav continued the momentum alongside his Mumbai captain, with the pair sharing a brisk 59-run stand. Yadav carried on even after Rohit’s dismissal, reaching his 3rd T20I half-century with a six off Lockie Ferguson and taking India to within a touching distance of victory with 23 needed off 24 balls.

However, Yadav’s dismissal caused India to stutter at the death, with the Kiwi pacers fighting back smartly to concede just 13 runs between overs 17-19. The game was in the balance with ten needed off Daryl Mitchell’s final six deliveries, but Venkatesh Iyer and Rishabh Pant held their nerve to ensure that the Rahul Dravid-Rohit Sharma era started on a positive note with a victory.