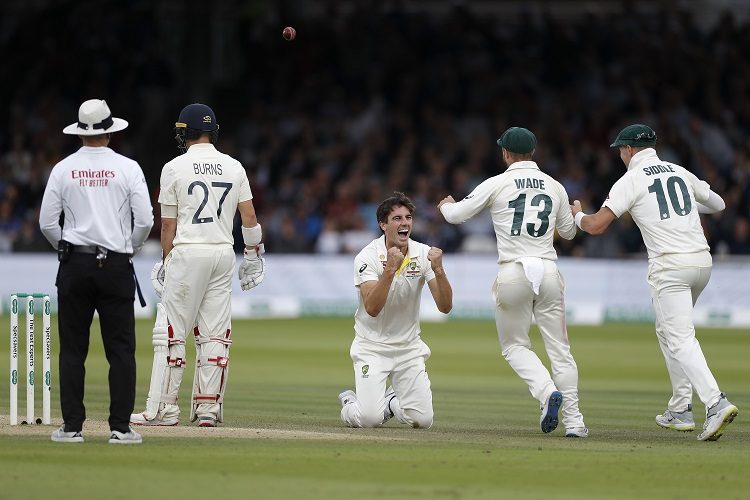 England had to chase down 383 or survive a full day and 7 overs to keep Australia at bay. They were expected to stay unscathed, but Pat Cummins (2/8) decided otherwise. He had Rory Burns caught at short cover off the third ball of his first over, and beat Joe Root’s bat to hit top of off stump next ball to leave England reeling at 0/2.

Joe Denly (10*) and Jason Roy (8*) weathered the storm for whatever remained in the day, but Cummins, along with Mitchell Starc and Josh Hazlewood, will be at them throughout final day, probably with Nathan Lyon wheeling away without a break from one end.

England started the day on 200/5. Starc (3/60) swung the new ball through the gate to bowl Jonny Bairstow (17) in the 11th over of the morning and had Ben Stokes (26) caught at slip. England needed 15 to avoid the follow on when they lost their ninth wicket, but Jos Buttler (41) ensured they achieved that.

Australia began poorly. Stuart Broad (2/54) dismissed David Warner 6 times in 8 innings when he got the latter leg-before in the first over; Warner registered a pair. Broad then had Marcus Harris (6) leg-before as well.

Jofra Archer (3/45) then had the in-form Marnus Labuschagne (11) leg-before and yorked Travis Head (12), leaving Australia in tatters at 44/4. But Matthew Wade (34) stayed put as Steven Smith (82 in 92 balls) – for the fifth time in the series – became impossible to dislodge. Australia declared soon after both Smith and Wade in quick succession.

Ben Stokes (England): Stokes had helped England put up a reasonable total at Lord’s with a hundred. He guided them to a miraculous chase at Headingley, with another hundred. Can he pull off another miracle this summer?

Nathan Lyon (Australia): The fast bowlers are likely to bowl in short bursts on the final day, while Lyon is likely to send down a minimum of 30 overs. If Australia have to win, Lyon’s role will be as crucial as that of any of his fast-bowling colleagues.

Australia to win and retain the Ashes unless it rains.