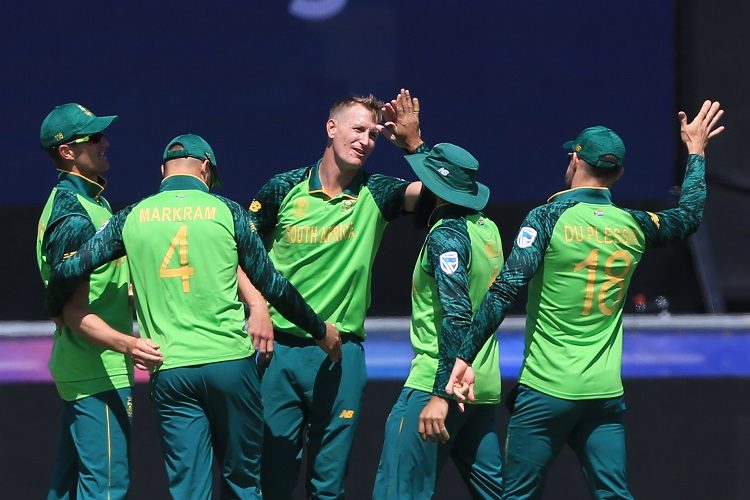 India beat Sri Lanka by seven wickets at Headingley to finish top of the table in 2019 World Cup; Australia lost to South Africa at Old Trafford, will play England in the semi-final; Usman Khawaja and Marcus Stoinis are doubtful for the semi-final clash against England; and Afghanistan will host the West Indies in India for a full series in November.

India finish top of the table

India defeated Sri Lanka by seven wickets in their final league game of the ICC World Cup 2019 to go atop the points table and earn a semi-final against the fourth-placed New Zealand at Old Trafford on Tuesday, 9 July. India were helped by centuries from both their openers – KL Rahul and Rohit Sharma – who helped the team chase down a modest total of 264/7 that Sri Lanka got after they won the toss and chose to bat.

Sharma became the first player to get five hundreds in a single World Cup edition, surpassing Sri Lanka’s Kumar Sangakkara, who had scored four in 2015. Sharma’s 103 off 94 and Rahul’s 111 off 118 made a cakewalk of the run chase as the duo added 189 runs for the first wicket in just over 30 overs. Captain Virat Kohli remained unbeaten on 34 to take India past the target. Lasith Malinga, playing his last World Cup match, finished with 1/82 from 10 overs.

Earlier, Sri Lanka were boosted by Angelo Mathews, who registered his second ton of the tournament, an anchoring knock of 113 off 128 balls with 10 fours and two sixes. Lahiru Thirimanne got 53 off 68 as the two added 124 runs for the fifth wicket to help their team recover from 55/4. But Jasprit Bumrah’s 3/37 and a wicket each for the rest of the Indian bowlers – Bhuvneshwar Kumar, Hardik Pandya, Ravindra Jadeja and Kuldeep Yadav – meant that the Sri Lankans couldn’t accelerate at the start or the death.

In a game that had consequences on the schedule of the semi-final, South Africa beat Australia by 10 runs to finish their World Cup on a high. The loss also means that Australia, who were topping the table before the game, finish behind India on the second spot and will play England in the semi-final at Edgbaston on Thursday, 11 July.

South Africa won and toss and batted first, and were propelled to 325/6 courtesy of a hundred by captain Faf du Plessis (100) and a 97-ball 95 by Rassie van der Dussen. Quinton de Kock got a quick 51-ball 52 at the top and built a 79-run opening stand with Aiden Markram (34) to ensure the middle order had enough buffer to build the innings.

In reply, Australia lost Aaron Finch (3) and Steve Smith (7) inside the first 10 overs and Usman Khawaja had to retire hurt early in his innings due to a hamstring strain. David Warner and Marcus Stoinis batted cautiously in the first Powerplay before accelerating when the field spread out. But Stoinis’ run out for 22 and Glenn Maxwell’s early dismissal for 12 put Australia back in trouble at 119/4.

Warner carried on and found support in Alex Carey (85). The opening batsman hit yet another century and added 119 runs for the fifth wicket before he was dismissed by Dwaine Pretorius for 122. He hit 15 fours and 2 sixes. Carey’s runs came off just 61 balls with 11 fours and a six but once he was dismissed at 275 as the seventh wicket to fall, the Australian lower order couldn’t put up much resistance and South Africa bundled them for 315. Kagiso Rabada finished with 3/56 from 10 overs.

Usman Khawaja’s participation in Australia’s semi-final clash against England at Edgbaston looks doubtful after he sustained a hamstring injury in the team’s last league game against South Africa. Marcus Stoinis has also been frequented by a side strain.

Khawaja had to retire hurt in the fifth over of the Australian innings, and although he came out to bat later, he could only score 18 off 14. Khawaja has been troubled by hamstring injuries before and captain Aaron Finch said the left-hander is “not looking good”.

“He has done a couple of hammies before and it feels a bit similar to that,” Finch said of Khawaja. “So in terms of replacements, we haven’t had time to sit down and talk about that yet. Marcus is just a bit sore in his side. It’s tough to talk about replacements when you haven’t got the full story. We will get that (on Sunday).”

Afghanistan will host the West Indies for a full tour in India in November this year. The tour itinerary comprises of three T20Is, three ODIs and the first-ever Test between the two teams. West Indies beat Afghanistan in their most recent clash, in what was both teams’ final World Cup game as neither of them to could make the final four. The Test will be Afghanistan third-ever after having played India in 2018 and Ireland 2019. They lost to India but beat Ireland.